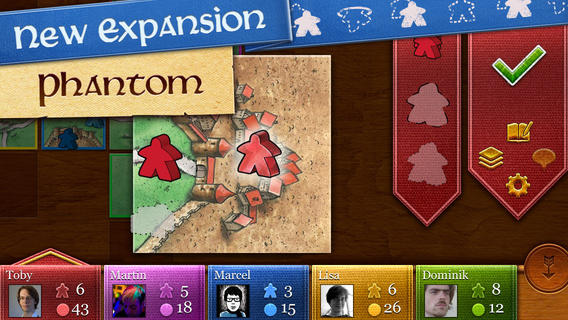 A new expansion is now available for Carcassonne, TheCodinMonkeys’ board strategy game now available on the App Store for iPhone and iPad.

The new expansion, which is available as an IAP in the main game, adds a new game piece called The Phantom. This will allow gamers to have one more follower at their disposal during the game, since it can be placed in addition to the regular one.

The Phantom’s inclusion will also allow gamers to be more liberal when placing followers, as the Phantom is more effective when used again and again during the course of the game. The Phantom can also ne used together with The Princess and Dragon expansion, which has been released back in December. The previous expansion included the Dragon card, the Fairy and Magic Portals. The expansion also introduced the titular Princess, enhancing the whole city-building system. Make sure to get the expansions if you’re enjoying this nice game and want to experience more of it, as the expansion effectively expand the gameplay experience in a lot of interesting ways.