I’ve had a great time playing GangoGames’ Cannon Crasha, but at the same time I found out that destroying castle after castle is not really the easiest job on earth. This is the reason why I have decided to create this cheats article for the game and share with you my Cannon Crasha tips and tricks to get better at crushing castles.

1. Start the game by purchasing the money room
I don’t really know how it’s really called, but it surely is the first option in the Wizardry section. This gives you more money and you should upgrade it often, too. Eventually you’ll be able to bring in the lady Dragon, and that’s a real blast!

2. Make every shot count!
Every 5 seconds, you get to shoot. Check out the wind, set the angle (I usually keep the aiming wheel at about two thirds to the right) and shoot. Try to hit the opposing hero for more coins.

3. Use the protective beams carefully
You can protect your castle with the use of beams, but make sure you don’t actually place them in front of your cannon (I did that once and trust me, it’s not nice!). Place them in the top section of the castle and they will be really useful. Also, a good idea is to place a beam at the base of your castle so that any incoming orcs and low-placed shots fist have to go through it before getting to the castle.

4. Save up for the dragon 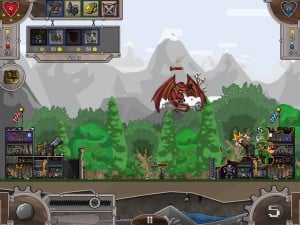 Especially early on, saving up for the dragon (combined with that money room) is easy and the dragon itself does a TON of damage. It costs 300 coins, but make sure you get it to make things a lot easier for you.

5. Shoot down enemy troops
As is the case of the dragon or other troops (like soldiers, orcs and so on), you can shoot them down with your cannon or other defensive units. As a result, it’s always a good idea to send some cannons out as the enemy player will try to destroy them first and therefore will save you a few cannonballs!

6. Missile shots
When you really want to kill that Orc or other baddies, use the Missile. It’s pretty expensive at 50 coins, but it will guarantee a hit of the closest enemy unit.

7. Sabotage power-up
The sabotage only lasts for 20 seconds, but completely stops an enemy room from working. If they’re killing you with soldiers or if you see a dragon incoming, it’s a good way to delay the pain and maybe turn the tides.

8. Learn what each troop does
If you have an Orc knocking at your castle’s door, the easiest way to kill him is by sending in a Soldier. Soldiers don’t attack castles, though… that’s what Orcs do. Or Cannoneers. Or Bombers. So learn your troops and use them accordingly.

9. Shoot down the characters that appear every now and then
They won’t “eat” your shot (meaning that you can still cause some damage to the enemy castle) and they will reward you with some nice coins. So if possible, try to shoot them for some quick and free money.

10. Use the special cannon balls
The Fireball is the best choice for causing some extra damage, while the split ball is excellent if you are dealing with dragons or a lot of incoming units.

11. Always watch the wind
Wind changes at random intervals, so make sure that you always keep an eye on the flag indicating the power of the wind. Either way (with wind blowing right or left), I found that the best way to shoot is to keep the aim bar at about three quarters. Always you will hit the enemy castle.

12. Try to destroy enemy rooms
If you hit a specific room enough times, you will completely destroy it and the enemy won’t be able to use it (the same goes for your rooms, so be careful – if you risk losing a room, make sure you quickly repair it!).

And this would be it – these are our tips and tricks for improving your Cannon Crasha game. Do you have other strategies that make you win duels? Let us all know by commenting below! 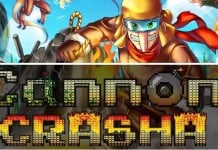