Home Guides Brawl Stars Amber Guide – How to Unlock and Play Amber in... 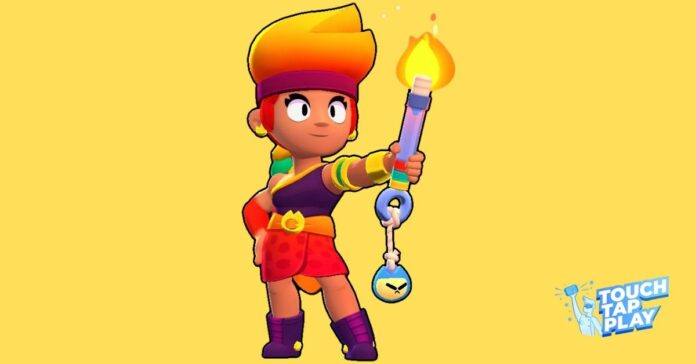 Amber is a Legendary Brawler of the Firebreather class. She uses flame as her main weapon and has high damage but moderate health. This guide will tell you about this character, her abilities, and the ways to unlock Amber in Brawl Stars.

Amber’s Attack is called “Dragon’s Breath”. She shoots like a very long-ranged flamethrower and the longer you hold the button the more flame will be released. The ammo of Amber will be reloaded when you are not attacking. You can shoot 4 seconds in total and release up to 40 flames before reload (10 flames per second).

Amber’s Super is called “Torch’Em!” and it allows her to throw a giant ball of flammable oil that leaves a trail of it. When you attack the oil it starts to burn and sets opponents you hit on fire. It deals tons of damage in combination with her Attack.

RELATED: How to Have a Rainbow Name in Brawl Stars

Amber’s Gadget’s name is “Fire Starters”. It makes her faster by 14% for three seconds. Also, she will leave a trail of flammable oil behind her. The Gadget has a passive effect that charges the Amber’s Super by 5% per second when she stands near her oil.

Amber got two Star Powers that are called “Wild Flames” and “Scorchin’ Siphon”. The first one allows her to have two puddles of flammable oil at one time, and the second one gives her 50% additional reload speed when she stands in her oil.

Amber probably is the most damaging Brawiler among others. She is very strong against slow opponents that are not able to run from her fire. Amber’s damage is always welcomed on the battlefield of Brawl Stars.

How to Unlock Amber in Brawl Stars

Amber is one of 5 legendary Brawlers, so unlocking won’t be so easy. She can drop with a 0,12% chance from a Brawl Box. So, be patient, and eventually you will get her.