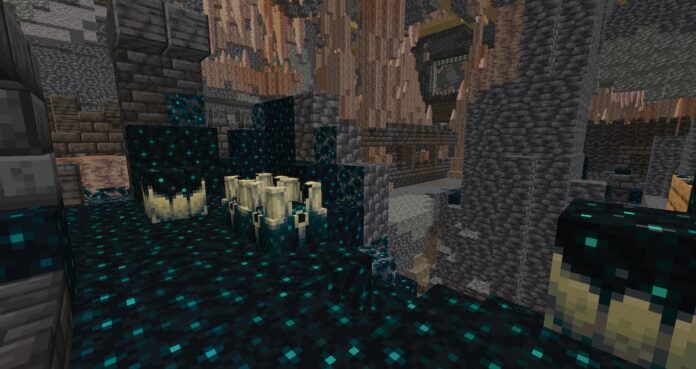 Mangrove swamps were first shown as part of the biome vote held in MINECON 2019 but failed to win the polls. On the other hand, deep dark caves were supposed to arrive with the 1.17 update but got delayed to version 1.19.

Mangrove swamps are an improved variant of regular swamps in Minecraft. These biomes are overgrown with mangrove trees and are home to white frogs. In this seed, players spawn right next to a large mangrove swamp biome. Java Edition players can also find a village at the spawn point, whereas Bedrock players will have to go X: 56 Z: -312 to find a village.

Java Edition players can use this seed to spawn near a tunnel leading straight to the creepiest biome in Minecraft, the deep dark cave. Java players can also find a village at X: 48 Z: 160 and an ancient city at X: 184 Y: -51 Z: 40. There isn’t much at the spawn point for Bedrock players other than deep dark caves.

This seed is one of the best seeds for deep dark cave biomes in Minecraft. Players can find massive deep dark caves underneath spawn locations stretching up to 2000 blocks away from spawn. There are lots of ancient cities hidden in these deep dark caves.

While mangrove swamps are a fun and enjoyable place, players will need to tread carefully in deep dark caves. Otherwise, they might end up having an unfortunate encounter with the warden.