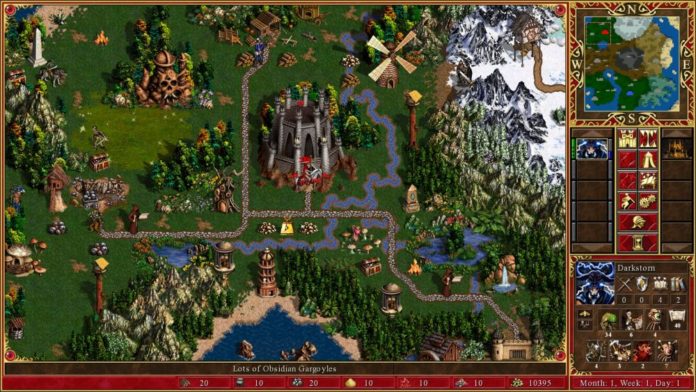 Heores of Might and Magic III is, in my opinion, one of the best games ever made. Of course, I am biased because I grew up playing games in the HoMM series – especially the 3rd, with all its expansions and unofficial mods (WoG for life!).

It is difficult for any game to reach the popularity and complexity of Heroes of Might and Magic 3 or, to a smaller degree, the others in the series, but fortunately some developers have tried. And now, more than 20 years after the launch of the greatest game in the series, it’s time to see what alternatives we have on mobile.

Therefore, today I’m sharing a list of the best games like Heroes of Might and Magic for iOS and Android. Don’t expect any of these titles to be exactly as the ones in the HoMM series, but expect a similar experience. And fortunately, there are quite a few of them available – both free and premium games.

So let’s not waste any time and instead let’s check out the best games like HoMM for mobile!

A game launched recently by Ubisoft in their quest to re-imagine Heroes 3 for mobile. While there are some elements that do remind us of the classic game, many don’t. So it’s a hit and miss here – some people love it, some people don’t.

We actually had a lot of fun playing the game and, even though comparing it with the amazingness of HoMM3 is a bit of a stretch, the game itself is good and can fill that void and need for Heroes that you might feel.

You can download the game for free on iOS and Android, then make sure to check out our guide to it, as well as the list of the best units in the game.

The first two games in the Banner Saga franchise, available both on mobile, are as different to Heroes of Might and Magic as they are like it. No castles and treasure boxes, no map exploration riding a horse and no fantasy creatures to bring into your army, but equally satisfying and beautiful.

It’s the series’ turn based combat system the places it at the top of this list, as well as its overall high quality. So even though the first impression is that The Banner Saga games have little – if anything – in common with the HoMM franchise, I still believe that you should give them a try and be surprised by how good they are!

Created by Nival, King’s Bounty is THE franchise that resembles the classic Heroes of Might and Magic games the most. There are a few titles in the series available for PC, but just one available on mobile: King’s Bounty Legions. Probably the least impressive for those who prefer premium games, but still charming and really good.

This is a freemium game indeed, but one that takes all the depth of the premium King’s Bounty games – and especially creatures and combat system – and offers them in a highly polished, highly addictive product. You’ll have to build your army and fight hordes of enemies, casting spells and making difficult tactical decisions in a matter similar to the original HoMM games. Highly recommended!

You can download King’s Bounty Legions on iOS and Android.

Another freemium game that looks a lot like HoMM, at least when it comes to exploring the map. Unfortunately, that’s about the only thing that it has in common – so no deep, turn based combat is present. But at least you have an option and that exploring part will definitely bring back some sweet nostalgia.

We have also written a guide for Dungeon & Heroes, so you can get a head start after installing the game. Which can be downloaded from Google Play or the App Store.

Created by Herocraft, this is another really solid free to play alternative to Heroes of Might and Magic. The game focuses on battles the most and plays in a very similar way to King’s Bounty Legions. It lacks a bit in terms of complexity and variety, but remains a solid alternative and a nice game to play, overall.

So head over to Google Play or the App Store to download it.

A really interesting game that fortunately flew under most people’s radars, although it should’ve been up there in the top lists. Turn based combat, nice mechanics and gameplay elements to adapts to (like the day/night mechanic that influences the heroes on the battlefield) and much more.

The game is available for free on Android and iOS.

I’d say that this game is in a really gray area, since many of the visuals seem to be identical to those used in the Heroes of Might and Magic series. But probably they’re different enough to deserve a place on the App Store and Google’s Play store, and I am happy about it.

This is, by all means, a Heroes of Might and Magic game. Sure, the troops look different and the graphics are a bit different, but it’s the closest you can get without playing a game in the original series.

Heroes: Forgotten Realm is available for download on iOS only.

Another nice mobile game that is clearly inspired by the original, but not looking exactly like it – like the above game, for example. Exploring lands, casting spells, taking part in turn based combat… you have it all here and despite the cartoony graphics, this game really offers a deep, complex experience.

You can give it a try right now by downloading it on your Android or iOS device.

I left it for last because this is not really a game, but an emulator / game engine that allows you to play the original Heroes of Might and Magic 2 on your Android device (yes, it is only available on Android right now).

This means that you do need the original Heroes of Might and Magic 2 game – and you will have to copy it on your SD card in order for it to work, but even if you don’t, you can still download the Demo and give it a try. Then, I am sure you can find a copy somewhere! Check out Free Heroes 2 on the Google Play store.

A really solid game that actually offers a lot of value to its players, being more like King’s Bounty than anything else. Still, you will get that nice feeling that you’re playing a bit of HoMM too, so that’s a good thing.

You have noble elves, bloodthirsty orcs, brave dwarfs or dreadful undeads led by heroes in this turn based strategy game that sees you fight for power and survival. A more recent game than most on our list and definitely one that’s worth checking out.

You can download Heroes of Flatlandia on iOS and Android.

As I said earlier, we do have a surprising amount of option. None of these games are as complex and beautiful as Heroes of Might and Magic 3, but some are really close. And they’re all worth playing, otherwise they wouldn’t be on our list! So waste no time and give them a try!

Also, if you know any other mobile games like Heroes of Might and Magic, don’t hesitate to let us know by commenting below. For a short while, there was even the HD remake for Heroes 3 available on iOS, but unfortunately it’s no longer available, which is a real pity. Maybe in the future…