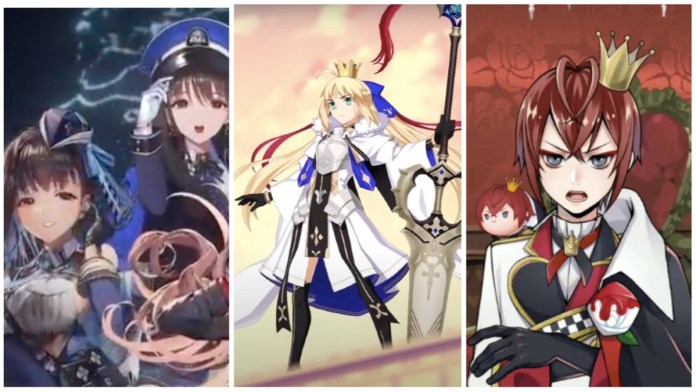 2022 was a fantastic year for gacha games across the markets, from ones that made their debut to already popular titles that delivered above and beyond. These games have fantastic storylines, incredible character designs, and fun mechanics, all the things that make gacha appealing. For those unfamiliar, gacha is a system where everything you get is on a lottery system. In a gacha game, you perform rolls to pull characters, weapons, items, etc randomly. It definitely isn’t for everyone, as gacha can often be frustrating. However, the stories and play can be worth it. Here are the best gacha mobile games of 2022, ranked.

Possibly the most cultured game of the year, Nikke Goddess of Victory is a science fiction shooter game where you train a squad of girls skilled in the use of artillery. In this setting, humanity is endangered, its population having been reduced to ashes by an enemy known as the Rapture. The only thing that has to stop them is the Nikkes, super-powered girls who are humanity’s last chance for survival. If you enjoy shooters and cute characters, this is definitely one to check out.

This was a fantastic year for Counterside, the popular Korean game having made a successful global launch after being exclusive to SEA. This game puts the player into the perspective of a mysterious character who takes ownership of an organization known as the Coffin Company. This firm trains and hires Counters, superhumans who fight evil in the universe called the Corruption. With a fantastic plotline, this is one you won’t want to put down. Counterside also did a successful collaboration with Holomyth recently, the famous virtual YouTuber group, so it’s safe to say it was a great 12 months for them.

Fate Grand Order is one of the oldest gacha games, but somehow it continues to remain on top. Some gacha games can get to a point where you feel at a plateau. This never happens in Fate because there are always new events to participate in. 2022 was a packed year for the game, with the North American server getting the long-awaited Olympus chapter as well as Muramasa. With the Avalon chapter expected to drop this spring, 2023 is shaping up to be just as good.

RELATED: How to Play Disney Twisted Wonderland on PC

Ever wonder what a gacha game that takes place at an all-boys boarding school would be like? In 2022, Twisted Wonderland came to fill this gap. The game had such a successful run in Japan that it was bound to launch globally one day. In this title, you play a gender-neutral character named Yu who is mysteriously transported to a world where Disney villains are anime boys attending a school called Nightraven College. There are different house dorms, each one headed by the main characters. Disney lovers alike will appreciate this game.

Genshin Impact continued to see success in 2022, reaching the mark of 126.4 million downloads globally just before the end of the year. This was a huge spike, that number having been 4.51 million only 4 months prior. Popular characters like Scaramouche and Dottore contributed to this. In addition, Genshin’s open-world format is perfect for those enjoy who relaxed gaming. There’s something for just about everyone in Genshin Impact, which is why it will likely be in favor for years to come.

All of these games are something work checking out in 2023. In particular, Twisted Wonderland is having its first anniversary with a free SR of its mascot character Grim, so go download it today!