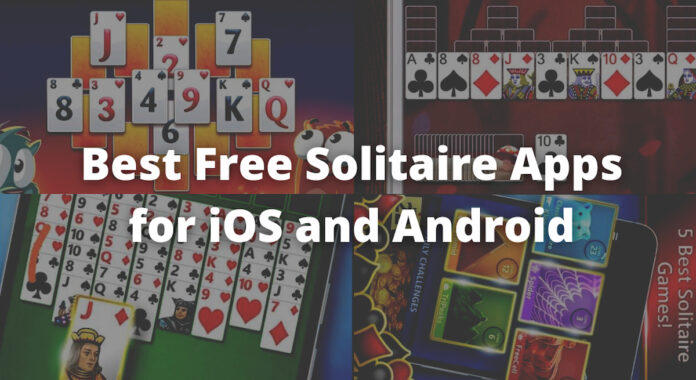 Before next-gen consoles and high-end games came to be, computer owners didn’t have a lot of games to choose from back in the old days and could only play Solitaire games all day. If it wasn’t Solitaire, it’d be some sort of Pinball, FreeCell or some other 2D computer game.

Solitaire is easily one of the most played games back then not only because there wasn’t anything better to play, it was an addictive game. And despite the rise of highly acclaimed video games that are available to play on numerous platforms, a lot of people still play Solitaire. So in this article, we’ll be listing the best free Solitaire apps for iOS and Android.

First off on our list is FreeCell Solitaire. The game is a brain-teaser card game that’s available on both iOS and Android. Ever since it launched, it has amassed millions of players around the globe. The mechanics of this game stays true to the classic solitaire games and will give you a feeling of the old times.

Play on different types of difficulties, customize your game or card background to your preference, and experience magnetic card movement and optimized battery usage for extended gameplay time. There’s also an undo option as well, which is always a necessary addition.

This is yet another Solitaire game that improves the classic solitaire experience with graphics enhancement, character and sounds. The gameplay is pretty straightforward as you need only two cards to stack them in an ascending or descending order until a deck is completed.

It looks easy but some challenges will surely put your brain and knowledge of Solitaire to the test. This game is also great for kids and anyone looking to learn solitaire.

Pyramid Solitaire is one of the modern solitaire games with a good story that’ll keep you playing for hours. You’ll have to team up with heroes and embark on various adventure-filled levels to progress to the main quests where you’ll discover treasures and other magic items of the ancient world.

You will solve puzzles, meet the fun beetle scarabs and most importantly, solve the mysteries behind cards that are all designed to provide you with a fresh new solitaire experience.

In this game, you’ll be tasked with clearing the field by stacking up cards. The gameplay combines both golf and classic Solitaire, which will test your skills in a new way.

We’ve saved the best for last this time around as Microsoft’s Solitaire brilliantly puts some of the best Solitaire card games in one app. You can the likes of Klondike Solitaire, Spider Solitaire, FreeCell Solitaire, TriPeaks Solitaire and Pyramid Solitaire.

The rules are simple, the gameplay is unique. You can experience the classic solitaire while keeping your mind sharp with features like Collections, Daily Challenges, Events and Rewards. Unlock over 75 Achievements to test your Solitaire skills and achieve a higher game score.