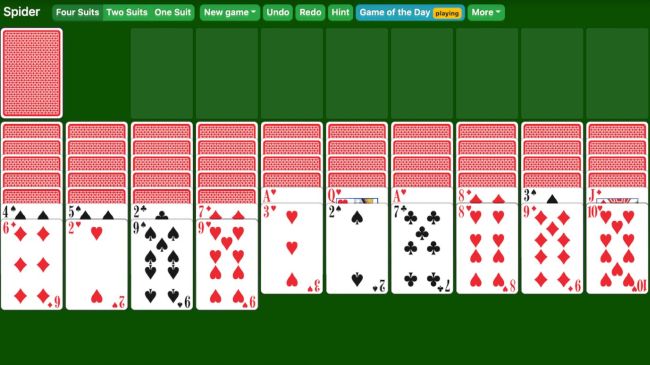 Games start with 54 cards being dealt in ten columns, with the top card in each column face-up. You can deal another ten cards at any point, with the new ones going down face-up on top of the ten columns.

As ever, the aim is to sort these cards into ascending numerical order. Once you’ve managed to make a full set, from ace at the bottom to king at the top, all 13 cards are cleared from the board.

So what do we mean by scalable? Spider Solitaire is either relaxingly easy or nigh-on impossible depending on how many suits you use. That’s because, while you can move a stack of sequential cards from column to column if they belongLast year Solitaired was released – and was arguably the definitive free Solitaire collection. It boasts more than 500 versions of the classic card game, along with a range of custom decks celebrating notable people past and present.

But 500 is a lot of games to wade through, so the team has taken the smart decision to unpack its unfathomable card-sorting compendium into manageable chunks, and one of those chunks is called Spider Solitaire Challenge.

One of the lesser known Solitaire variants, Spider Solitaire is a fantastically scalable card game that you play with two decks.

to the same suit, you can’t if they belong to different suits (though you can still make stacks out of them).

It’s an ingenious twist that totally transforms the game. You can either give yourself a nice easy run, or challenge yourself to overcome impossible odds.

We highly recommend giving Spider Solitaire a try. Not only is it a great game, but it comes with a variety of fascinating and enlightening deck designs, made in collaboration with institutions like MIT, Encyclopedia Britannica, and others.

You can play with decks celebrating women’s suffrage, inspirational inventors, heroes of the civil rights movement, and more. Or you can simply enjoy some classing playing card designs, such as the iconic Parrots and the various Jones decks.
Spider Solitaire Challenge is available for free right now on the Google Play Store, and you can also play it online.