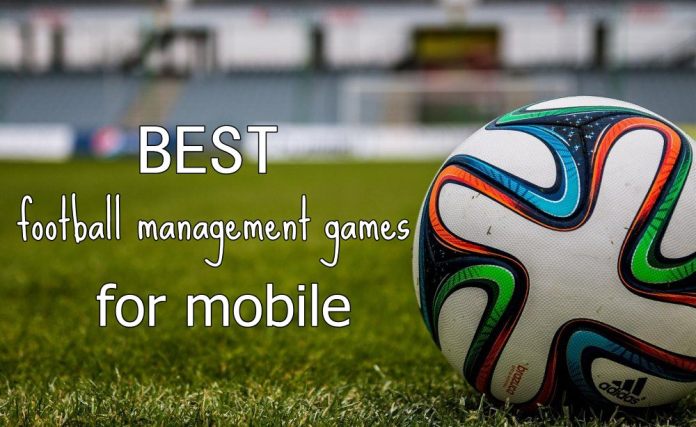 Gone are the days when I was able to spend hundreds of hours building up my career and club in the yearly Football Manager games for PC. Fortunately, I still get some minutes of play-time each day on mobile, but I can never get to the depth offered by the FM series.

And today I decided to share with you some games like Football Manager for mobile – a complete list of the best football management games available on iOS and Android.

The good thing is that the games that I am recommending today are free to play, unlike Sports Interactive’s titles, but as a downside, they’re not offering as much depth and in some cases, not even real player and club data.

I have tried, played and thoroughly enjoyed all the games listed below and I am happy to share them with you. So without any further ado, let’s check out the best football manager games for mobile. I am sure you’ll love them too!

Some of the older Football Manager fans know that the game was once called “Championship Manager”. And yes, this is the game in question, although under a new development team and with completely different gameplay mechanics now.

Still, it’s extremely similar to SI’s games and even more similar to the old school titles that some of us still remember.

It’s probably the most in-depth alternative when it comes to real players and club data – and also available for free – but not without flaws.

It is, however, extremely enjoyable as it offers everything you’d possibly want from a management game and the social aspects are top notch – this always matters, in my opinion. I can say that this is the closest thing to Football Manager games that you can play on mobile, for free.

You can download Champions Manager Mobasaka on Android and iOS.

This is probably one of the best known and most popular social football manager games out there and it has been online for a long time now, always updated with new content and new features.

It is extremely fast paced – with matches being played on a daily basis – and it has a really active community. Many features try to force you to spend real life money on improvements and boosts, but overall you can enjoy it without spending real life money on it.

It’s a game that offers fantasy leagues with fantasy players but has a very high level of depth, allowing you to raise the next superstar and become a famous manager within the community.

So if you haven’t played it yet, or if you only tried it a long while ago, maybe it’s time to give it one more try. It has grown tremendously and shows no signs of slowing down!

Top Eleven can be downloaded for free on the App Store or the Google Play Store.

The good thing about PES Club Manager is that it also has serious depth and solid gameplay, so it’s a lot more than just that good looking game out there. And its developers keep updating it and improving it over the years, which is always welcome.

Although it’s not as in-depth as other similar games, it does offer you the chance to manage real clubs and sign real players, battling it out against renowned clubs and raise to glory, while controlling the tactics live for each match. A more casual approach for sure, but one that many will appreciate.

So why not give it a try if you haven’t done so? You can download the game for free on iOS and Android.

If you’re looking for an even more casual approach, OSM is definitely the game for you. This has also been out for a few years now and it kept getting better and better, with new features being added over time.

It’s fast paced and fun to play, but in terms of actual simulation, it still lacks a lot. But it’s not built as a realistic football management sim. Instead, its developers decided to offer a fun, fast paced, easy going game that you can play at your own pace.

The game does come with real life data, meaning that you get to manage real players and clubs. And despite its very casual approach (or maybe just because of it), it’s perfect for quick bursts on mobile.

You can give Online Soccer Manager a try on iOS or Android.

Just like Top 11 (and the Football Manager franchise itself), this is a game that has been around for many, many years and still has a massive following online, no matter if it’s mobile platforms that we’re talking about or PC.

This is a game with a deceptively casual approach, like the funny images it uses for its player portraits, but in reality it is very complex and addictive and all in all, extremely fun.

You’re not playing with real life clubs and players, but this is what makes it even more addictive to some: finding the next superstar before everybody else and taking your team from the lowest divisions to the top are great challenges to take!

Check out Hattrick for mobile on Android or iOS.

A game that will make you remember the classic FIFA Manager games on PC (if you ever played those). It definitely has the same feel and it’s pretty awesome if you’ve been feeling nostalgic lately.

But despite its gorgeous graphics, the game itself offers a lot of depth and is definitely one of the most complex football management titles on mobile, offering solid data of what seems to be real players with changed names due to licensing rights. Either way, these things don’t matter too much when we’re talking about a high quality title you will surely enjoy!

So if you’re ready to take on the challenge of building your club from scratch and turning it into the best one in the world, you’ll love SEASON 20 Pro Soccer Manager.

If you want something slightly different, you will definitely get that (and a lot more) from Underworld Football Manager.

Offering a unique twist to the genre, the game mixes traditional gameplay mechanics with bribery and sabotage techniques that you can use to keep on winning. A sort of Mafia City meets Football Manager.

Part football manager, part city builder, part strategy, the game offers a solid depth and challenge rate, despite its very unique approach and it can definitely become very addictive. Certainly give it a try if you haven’t done so already!

You can check out the game on Android and iOS.

I just have to include the king, the best football manager game ever! I know that the title says “best games like Football Manager” so you’re automatically aware of how cool this game is, but it just has to be mentioned – especially for those who were searching for a solid football management game to play on mobile.

This one is not free and comes in two variants – the traditional Football Manager Mobile (which offers all the features and content of the PC game), as well as FM Touch which is a faster, more casual approach, perfect for those with real life jobs, families and bills to pay.

The games in the Football Manager franchise have long been considered the best management simulations ever and I agree with that statement. So if you haven’t played them yet and you have some money put aside to spend on a premium game, don’t hesitate!

These would be our recommended titles. I know that there might be other good games out there which we might’ve missed. If we did so, let us know by commenting below. And don’t forget to let us all know which one’s your favorite football management game on mobile!

Related: Football Manager 2023 Has Been Officially Announced for Both PC and Mobile