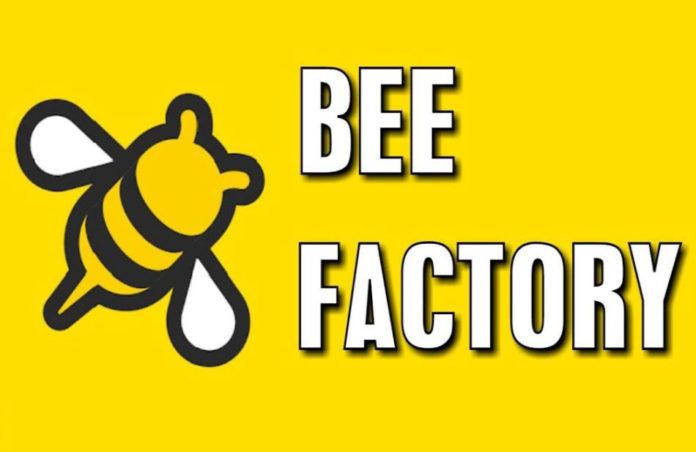 In Bee Factory you are the manager of a LOT of bees. You direct what they should do to bring you all the honey and turn it into money (now I make bee rhymes, great, that’s how addictive this game is). Well, being the adept of many addictive games (see Epic Seven),  I’ve decided to embark on a new adventure and bring you the best Bee Factory tips and tricks to bring you lots of money (and therefore faster upgrades and more bees).

One thing I should mention before we start, is that this game will keep running and producing money for you while you aren’t playing, so you don’t have to worry about being in game 24/7 (but I am pretty sure you will find it difficult to stay away from it). So having said these, let’s get into the Bee Factory cheats and tips!

Catch the queen bee! (no, not Beyoncé)

Once in a while you will see a giant bee flying around your screen; that’s the Golden Bee. It won’t be there for long, so pay attention when you are in game, because it will reward you with a great amount of money. 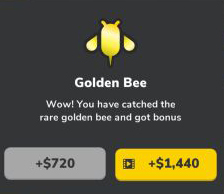 All you have to do is tap her and you will see the money she has for you. As you level up, the money amount increases, so the upgrades for the bees and the production line are easier to get.

On the production line up top, you will see jars of honey rolling one by one. The think you might have noticed is that it’s moving relatively slow. Well, there is something you can do about it!

To make it roll faster, you can constantly swipe right and the jars will cash in much, much quicker! That will make your profit go up in no time and the leveling progress bar will fill up as fast as you say “bee”.

– honey profit a.k.a. how much money you get from a jar of honey

– speed a.k.a. how fast the line is rolling (the faster it moves, the more jars cash in and that results in more profit)

– capacity a.k.a. how much honey your jars can fit in, the more honey they contain, the more valuable they are

– cells a.k.a. unlocks one more cell for another bee to join the party

– speed a.k.a. how fast your bees move around (it’s quite fun seeing them at max speed)

– honey production a.k.a. how much money bees produce individually (higher level bees produce more than the lower level ones)

So in my opinion, when you want to upgrade, you should first do it like this: for the first levels, until you get to late second / early third stage you should upgrade the production line so it won’t be so slow, but do not neglect upgrading the bees! Keep them somehow even. In the later stages, I suggest you upgrade the bees faster, and the production line when you have the funds and the bees are maxed out.

Pay attention to the Magic Hive 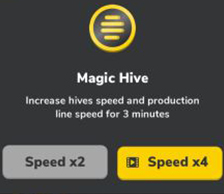 This is the real money-maker! The Magic Hive appears in the top right of your screen and doesn’t last long, but it will speed up everything by 2x (or 4x!!! if you watch an ad) and it’s an amazing tool to level you up faster than you think it’s possible. This, however, comes with an even better trick: stack the buffs!

To do that, you should be willing to watch a couple of ads and prepare your fingers for some fast swiping! First think you need to do is to watch an ad to get 4x speed from Magic Hive (you can do it with 2x too, but it’s better on 4x) and then watch an ad for Double $ x2 (top left of the screen).

These two buffs will stack up and now all you have to do is swipe right on the production line for 2:30 minutes and you will level up 4-5 levels! One thing to keep in mind while stacking this buff is to not waste time watching other ads. If the Golden Bee appears, just tap it and get the normal money she has to offer, same with leveling up rewards.

If you watch the ads, the time counts towards the buffs and the 30 seconds wasted watching an ad will not be worth the 2 levels you can get in that time. 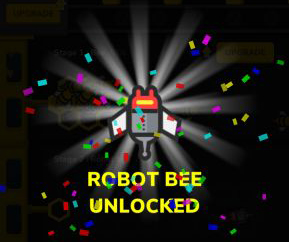 It’s a very fun game with lots of puns on bees. As you level up, you will unlock new stages, and with these will come new bee types. Each newer bee type produces more honey than the previous one, and will cost more to upgrade. But worry not, it’s not as hard as you think and you will have a blast discovering all the weird bee creations.

Ads are better than you think

As I mentioned before, these are a great way to buff up your hive and increase honey production. Ads last for 30 seconds, and they are worth the time because of the great reward you get.

Double $ x2 is a buff only available by watching ads, but for the other features, the adds double the reward you get. When you level up, you get an amount of money you can double, and same for the Golden Bee.

There is another option that those ads unlock, and that is a new stage (and new bees). These stages unlock at a certain level, but by watching a certain amount of ads you can unlock them 2 levels faster! So, if you are curious about that, keep watching and playing!

Time is a matter of perspective

The ultimate cheat you can use in case you want to SUPER increase productivity is to speed up time. This requires you to disconnect your device from the internet, so if you are ready to do it, read below! 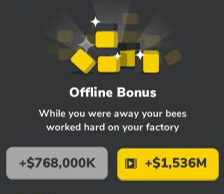 Since the game counts the in-game time as your mobile device’s time, you can change that. First thing you need to do is disable Wi-Fi and turn off Data Traffic. Secondly, go to your phone settings and change the time (let’s say, put it 5 hours from now). Third step is to turn back on the internet and run the game like nothing happened.

You’ll see the offline reward skyrocketing (and if you watch an ad to double it, it’s even more money)!

So, this concludes today’s article on Bee Factory cheats and tips. The game is a very fun one and I am sure you will have a blast swiping with the buffs active! If you have any more tips for the other players, leave them down in the comments below!