An endless runner that brings in a competitive, direct, play element? Well, that sounds extremely interesting and that is exactly what Battle Rush is. And it could be a lot more, but for starters, we shouldn’t complain.

Basically, the game is divided into two section: the first classic one sees you run through randomly generated environments over and over again, collecting coins to spend on power-ups and upgrades that you will use in future games, be them classic or competitive.

Which brings us to the second type of play, the player versus player competitive mode. Here, after the game automatically finds an opponent somewhere in this whole wide world, you fight not to collect the most coins before times runs out or something similar. No, here you try to bring the health of your opponent to zero! The shiny coins are replaced by attack spheres which increase the power of your attacks and health spheres that regenerate your lost health. In order to actually attack the other player and cause damage, you must run through a specially marked box. Pretty clever, pretty nice and extremely easy, in theory. 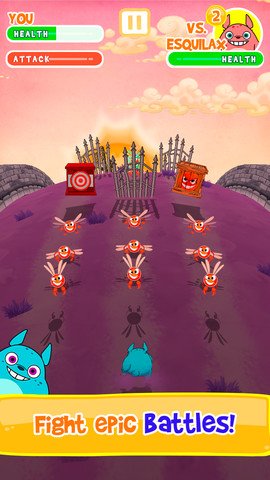 In Battle Rush, you control your creature the classic way: swiping left or right makes them switch lanes in the indicated direction, while swiping up sees your creature jump.

In terms of upgrades, we have a fair share of them waiting to be purchased, from new characters to boosts to our attack skills, extra lives and so on. There is a pretty nice variety and they are fairly priced up to a level when it seems that you have to run for days and days at a time to gather all those coins…

However, despite the nice concept and that whole competitive part, there is a certain “I don’t know what” that doesn’t make me go completely nuts over this game. I spent minutes thinking why I don’t really like it a lot more, and I couldn’t find the answer. Maybe it’s the relatively drab artwork, the lack of variety on-screen, the less than charming characters… I really have no idea, but the truth is that this game didn’t really manage to put me under its spell. But it keeps me playing thanks to that brilliant idea about competitive, synchronous play. 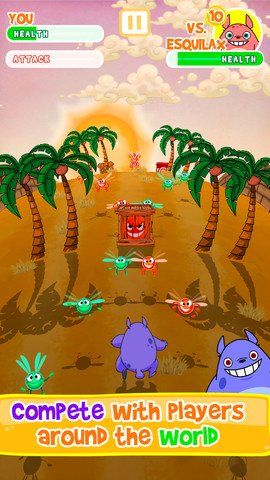 As a conclusion, for a free game, Battle Rush is a real deal: it probably marks the beginning of a new era in the endless runner genre with that competitive element and even though it is not perfect, it has to be tried because it brings a breath of fresh air and a charming approach to the genre. Really, try it!