Home Guides Battle of Zombies Cheats: Tips & Tricks for the Perfect Base 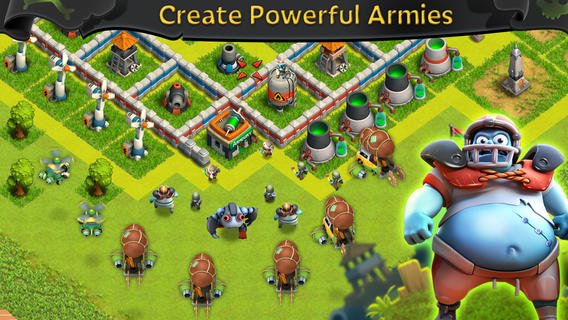 A new strategy game is taking the iOS world by storm: Battle of Zombies, a game similar to Clash of Clans or Jungle Heat, two of our already favorite games here at Touch Tap Play. And since you might want to get a head start advantage, we’re here to help you with a set of Battle of Zombies cheats, actually tips and tricks that will help you build up your base in no time and help you be one of the best.

The game is fully titled Battle of Zombies – free MMO RTS strategy wargame, but we’ll use just the first part for identification to keep things simple. Now let’s move on and let’s check out below some Battle of Zombies cheats and tips!

– Log in as often as possible during your first few days. This is the time when you are still in protection and you should take advantage to build up your base as much as possible.
– Use gems early on. The game starts with you getting quite a bunch of gems and use them to hurry production and therefore the pace at which you are building up your base. Just make sure you don’t use them when you have no resources left, which might happen often at first.
– Upgrade your resource producing buildings at first. The Wind Generator should be the main priority for a building to upgrade at first because you will need a lot of it, but try to even up the Toxin Towers too. Max out these towers early on to get full resources to build up your base.
– Attack bases in the campaign. You’re not interested, at first, in star ratings, so just attack the campaign bases and go for the resources. You need to build up your base!
– Complete the missions – they naturally take you through the steps needed to build up your base to decent standards, but don’t make them a priority. It’s more important to upgrade your main buildings first.
– Upgrade Crypt and Town Hall second – just after the resource buildings and the storage space for them, these should be next on your like. You still have days of protection, so you don’t need to upgrade the defenses, so focus on becoming a real threat in attack.
– Also built the University as soon as possible to make your troops even better.
– Take full advantage of the walls. Early on, you won’t have enough walls to protect the entire base and you don’t really care about badges. So make sure you protect your resource storage and defenses, and not necessary your Town Hall. You will lose battles, but you will also go into protection and get to build up your resources. Your time will come soon!
– When you start attacking other players, always go for resource gains. Winning the battles does not matter that much at an early point in the game, but getting more resources. Also, in order to minimize the resources you spend for training your troops, make sure to send the minimum troops required to get what you want.
– Join a clan as soon as possible. Try to look for an active clan (where people donate troops) as donated troops give you an extra edge in battle. But remember to donate troops yourself, otherwise you will probably be kicked out of the clan.

– You are training troops in your Crypt, and the higher the level of the Crypt, the more types of troops you have unlocked. Also, the more troops you can train.
– The Obelisk is the place where you hold your troops and the higher its level, the more total troops you can have.
– The best troop to use early on is the Burglar, in a combination with the soldier. Since your goal is to get as many resources as possible from battles, the pair works wonders: send a few soldiers first to draw fire, then unleash a set of Burglars. They will get as many resources as possible before the end of the battle. Alternately, if you have unlocked the Fatso, it’s even better to use them instead of the Soldiers
– Later on, when you will go for rating, the golden rule of thumb is that the better the level of your troops, the better they will perform. A good mix at all times is Fatso & Throwers and some Bombers to go through the walls easily, maybe adding up a few bombardier and Fire Starters. However, the idea is to train the cheapest troops possible for getting a win at minimum costs and therefore maximize your gains.
– UPDATE: We’ve just been tipped on a website dedicated exclusively to discussing the game and strategies, you can check it out here.

The attack and defense strategies should be changed based on what exactly you want to achieve in the game. Here are the strategies for when you want to have as many resources as possible:

– Attack: rating is not important! You should attack easy targets with a lot of resources, ideally inactive players (because their traps no longer work). Go with as many Burglars as possible, but first launch a few Fatsos to draw fire. A few bombs might also be useful to clear the way.
– Defense: Since rating is not important, you will place your Town Hall outside the city walls, luring in players who only want to get Badges and are not interested in the resources. You keep the resource storage between walls, heavily protected by all your defenses. Remember: more rows of walls, more difficult for the enemy to reach what they’re protecting.

If you are going for badges instead, the strategies will differ a little bit:

– Attack: This time, you don’t care about resources that much, but about badge gains. So make sure you attack players that reward you with a ton of badges. Also, you need stronger troops to get 100% from each battle, and a good combo is Fatsos / Throwers / Bombardier (and a couple of Bombers, maybe). Alternately, you could go just Fatsos / Bombardier and Bombers, but in this case the costs will be higher and you might run out of resources soon.
– Defense: You want to keep your Town Hall secured and hope for as few stars gained by enemy players. Therefore, you will place the Town Hall in the most secure area, surrounded by as many rows of walls. It’s better to have a row of walls, buildings, another row of walls, another set of buildings and only then the Town Hall surrounded by walls.

And these would be our basic tips and tricks for Battle of Zombies. Stay tuned with us as we’re working on more in depth guides to help you with everything about this insanely addictive game for the iPhone and iPad!