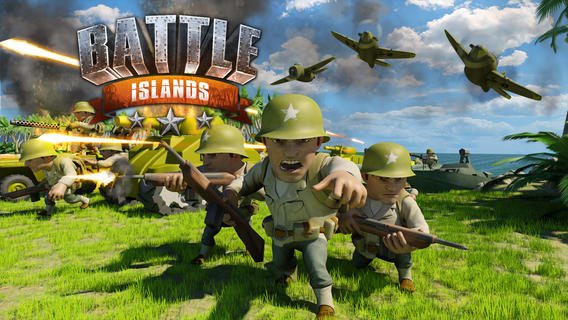 Battle Islands is a new strategy game for iPhone and iPad, a game that is like Clash of Clans. There are some different things, though, and some interesting ones too and to cover them all and a few extra, we have decided to share with you a set of Battle Islands cheats – a set of tips and tricks to help you get the most out of the game and hopefully help you become the ultimate soldier.

So let’s not waste any time and let’s check out below the Battle Islands cheats, tips and guide below!

1. Expect really slow progress
With just one type of currency (the supplies) you might be shocked at how slow your progress will be and you will always find yourself needing more supplies. So expect low progress, unless you are ready to attack, which takes us to the next step:

2. Attack early on
Don’t wait for the protection to end, because you’re just wasting time. Your Factories won’t produce enough, your supply depot will be small and it will take a lot of time to upgrade the command bunker. My advice? As soon as you have the Barracks ready and the 18 soldiers trained, start attacking to loot resources and speed up the base building process.

3. Quickly upgrade everything
Just like in other similar games, the Command Bunker is the heart of the base, and you should focus to upgrade it as soon as possible in order to unlock new buildings and give you the chance of having more resources. Factories should also be upgraded early on to maximize resource production too.

4. Upgrade vs Fortify
If you decide to fortify your buildings, they will be tougher to break by enemy forces and will result in you grabbing more wins. However, that should not be your priority early on. Instead, focus on upgrading your buildings to maximum capacity, research for new troops and clear the land and only when you’re OK with the state of your base, start to fortify the buildings. I would recommend starting with the Supply Depot and Command Bunker – the most important buildings on your base.

5. Research New Troops
Unlike other games, upgrading the barracks won’t automatically give you access to new troops. Instead, you will have to research them in the Command Bunker, so make sure you do that when you have the resources. Research requires a lot of time but fortunately can be done at the same time with an upgrade, so do it.

6. How to choose the bases to attack
Unlike other games, you can’t easily browse from base to base searching for one to attack and instead you select them from a list that gives you minimal information. It’s true, if you don’t like what you see, you can retreat before deploying troops and lose 0 medals, but it takes a lot of time. So it’s nice to have a system to choose your targets.

Therefore, you could go for those with a small number of medals (it means that they have been attacked previously and failed – but could also mean that they attacked and failed) and go for the easy win. Those with more medals are clearly active players and they might actually be the jackpot since they will surely have more resources ready for looting. Early on you should only care about getting more resources and not medals, so try to get as many as possible from each attack.

There is not much diversity in Battle Islands and the strategy options are pretty limited, but I am sure that with these basic tips and tricks your base will grow and you will get better and better at this game.