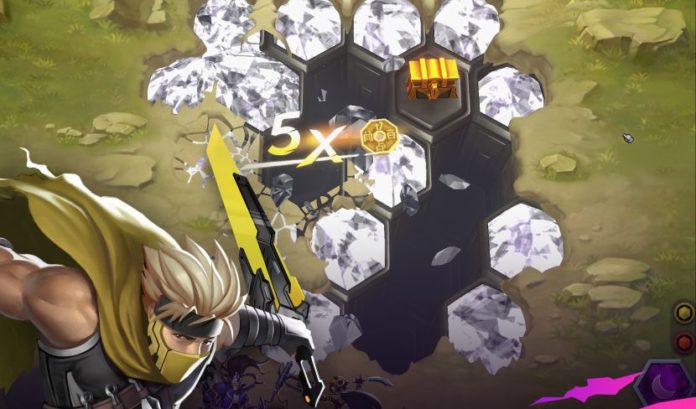 I have decided to write a short guide on the Battle Breakers Color Match mechanics because it seems that some people still have some trouble understanding how this extremely useful feature actually works.

I have touched the subject when I shared our Battle Breakers tips and tricks, but I want to go into full depth and tell you exactly what the color match means and how to achieve it – as well as more things about colors in the game.

So… what is Color Match and how does it work?

It’s pretty easy once you get used to it, actually! And it all has to do with the colors of the Crystals on the battlefield.

The Crystals are the things that you tap during battles in order to reveal what’s behind. And if you look closely, after each tap they change color (although on some occasions they might not).

These are the Crystals that give you the Color Match bonus (or not). Let’s take the image below as an example:

As you can see, the crystals on the battlefield are Purple. The heroes that I’m fighting against are Green and Yellow.

This means that if I attack the Green hero with a red one, my red hero will deal more damage because it has the elemental advantage.

If I attack the Yellow hero with my Purple one, it will deal additional damage because it has the elemental bonus.

BUT since the crystals on the map are Purple already, if I hit with the Purple hero, after they attack, they will also get back some health and mana.

So basically, this is what the Color Match bonus is all about: you get some extra health and mana back if you attack with a hero that matches the color bonus. There is no penalty if you don’t.

Now, there is one thing that some people might not know: you have a bit of control over the color of the crystals on the map!

Let’s look at the screenshot below, mainly the bottom right information:

As you can see, we have there details on what color the next crystals will be. In this case, if I tap a purple crystal, the remaining crystals will become red (so the Color Match bonus will be for red characters). After red, it will be green.

But if you are happy with the current color of the crystals, you can keep it until you find a new opponent to battle!

In order to do so, simply click the icon representing the current color crystal (the one next to the Auto button). This way, crystals will remain purple and you will get a potential Purple Crystal Match Bonus if a new enemy is found.

This is important and extremely useful when planning difficult battles or when you’re trying to restore health and mana for a specific hero.

Should you always go for the Color Match in Battle Breakers?

Since this is a gameplay element that only heals a small amount of health for the attacking hero and restores a bit of mana, it doesn’t really make a lot of sense to always choose this.

You shouldn’t choose the Color Match bonus when fighting a strong enemy, for example, if that color doesn’t have the elemental advantage.

Unless you really need to get that boost in mana and health, you should always attack difficult enemies with the heroes that are best suited: either those with an elemental damage, or those which can activate a skill that can help you during the battle.

Also, it almost never makes sense to waste a turn and destroy a crystal to get a new color for a match bonus. You can do this though if you’re fighting a single enemy that you can destroy before it moves – and gain some extra health and mana back in the process.

But the truth is that in most battle situations, it’s not worth going that deep into strategic thinking.

But at least you know know everything about this interesting gameplay mechanic and if the situation requires it, you will easily take the most out of it.

If you want to check out our other guides for the game, we have already talked about Pets, the Battle Pass or how to unlock more heroes. Even more articles are coming soon, so stay tuned!