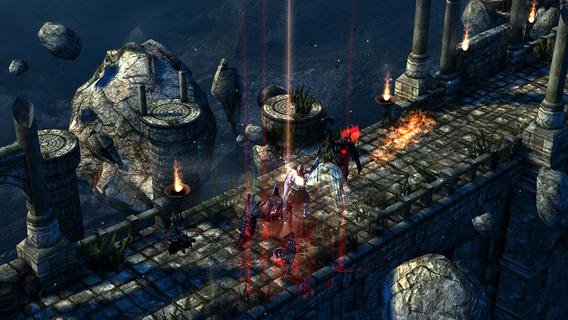 When I started playing Archangel on my iPad, I had the immediate feeling that I was some kind of Michael (and I am talking here about the movie): I have wings, but I don’t fly, I am a creature of supreme power, yet somehow I started to lose my grip and have to learn it all over again. Bring it on, I said, launching a fireball towards some barrels that were in the way.

A hack and slash game insanely optimized for iOS devices and specifically for touch screen devices, Archangel easily shows how it should be done, at least in terms of controls. The touch controls are absolutely beautiful and easy to use: you tap to move, you tap enemies to attack (or hold longer for more powerful attacks) and then you have a full set of gesture-based attacks and control options that make everything extremely fun to play.

It’s true, occasionally, by the nature of the touch screen, you might teleport to a place that you wanted to attack or perform the odd attack, but this doesn’t hurt the game too much and makes it part of the whole picture. Plus, that teleporting thing is extremely useful if you get into unwanted trouble (be it accidental or intentional). 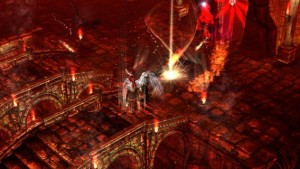 Instead of challenging you to explore a huge open world, Archangel for iOS is divided into levels, levels in which you have to destroy as many enemies as possible, get rated based on your performance and be allowed to do it over and over again to improve your stats, rewards, and self esteem. I am not sure if I am particularly happy with this approach, but it does mean that instead of endless minutes of roaming around a desert trying to deliver item A to person B, here you have non stop action. Which is exactly what you need from a hack and slash game!

Loot is also included in the package, with it being collected automatically and added to your inventory. You just have to remember to equip it (unlike me) and if you don’t own it, you can buy it. You can also buy blessings to start the game with a full health bar, which is a nice addition even though for the hardcore gamers it might seem like a little bit of cheating.

What I like a lot about Archangel is the presentation: visually, the game is stunning and atmospheric. There is a huge level of detail in the surroundings and everything looks great, especially the physics powered by the Unity Engine.

Investing so much in the game visuals does come with a setback, though, as the levels look very similar to each other and eventually you’ll really feel the need for some massive environmental change. But even with that, Archangel is fun to play. It is intense, well balanced and extremely addictive.