Home Game reviews Anybody Out There: Dead City Review 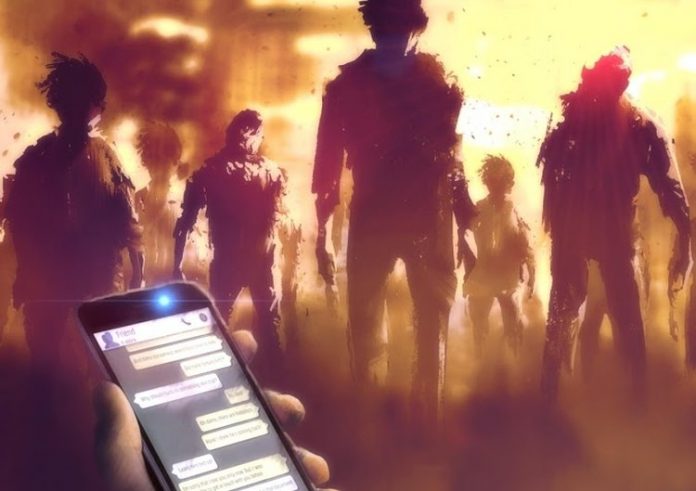 What would you do if one day you would receive a message from an unknown number asking: “Is anybody there?” After playing Dead City, you would never ignore such messages. Because they might mark the beginning of your greatest adventure so far.

Completely text based, Headup Games’ Anybody Out There: Dead City offers a really unique take on the zombie apocalypse genre. Played exclusively as if you’re exchanging text messages with a complete stranger, the game is a rollercoaster ride of emotions: good and bad and everything in between. But what matters the most is if, at the end of the day, you’ll be pleased with how things turned out. Let’s see what I think!

The game begins with you receiving a text message from an unknown number. After exchanging a few text messages with the stranger – whose name is Sam – you find out that something terrible happened in his city and there’s a bit of a zombie apocalypse thing going on. Sam seems completely helpless and mostly clueless and you will have to guide him (or maybe her?) through everything. By sending text messages. Fortunately, you won’t have to type them – but choose one of the two predefined options which will change the way the story goes. 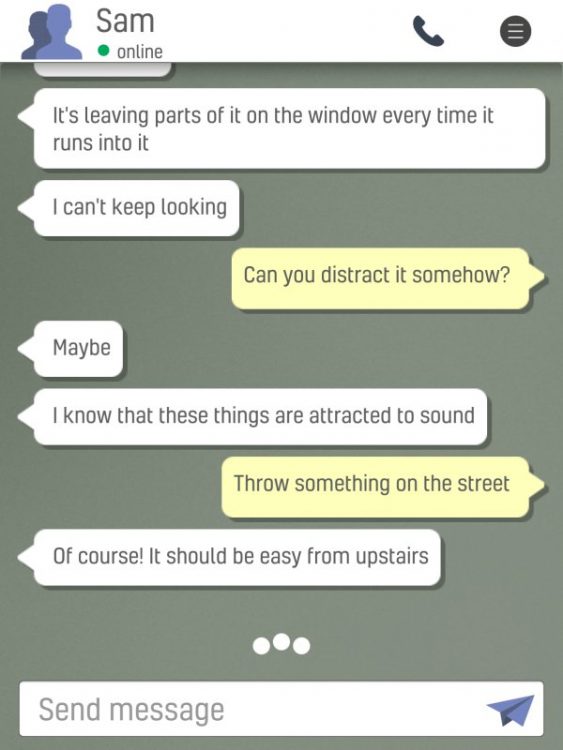 The interesting thing is that everything happens in real time in Anybody Out There: Dead City. So if Sam says that he’s going to the house across the street and he’ll text you once he’s there, you will get no message for 5-10 minutes. Sometimes, you will have to wait a few hours before you are allowed to continue playing.

An interesting concept without doubt, but early on it made me feel a bit more frustrated than excited or curious about the outcome of the adventure. There are moments when you only exchange a few words and nothing much happens before Sam disappears for a while. This is risky because the game might not have enough time to hook up everybody and make them care about Sam, about what happened or waiting for his next update.

Fortunately, the game picks up from here relatively fast and soon you’ll be faced with difficult moral dilemmas similar to Telltale’s The Walking Dead Series: will you try to save your friend who’s been bitten by a zombie or leave her behind, winning some time for your own survival? Will you believe the happy story of a jolly old man who welcomes you to his home or try to avoid it completely, as something strange is probably going on? 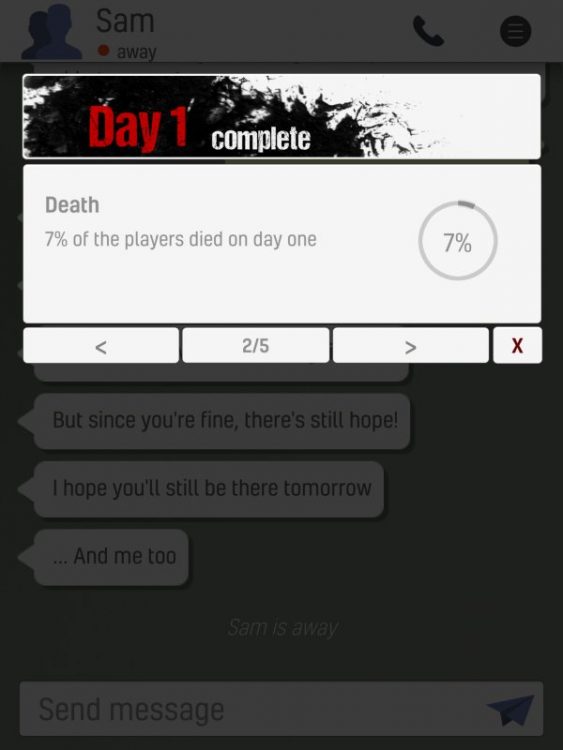 The choices are yours to make and on many occasions – IF you manage to get over the slow start – they are really tough choices. More than once I spend minutes thinking about the best possible option to recommend to Sam. And on few of those occasions, I was utterly wrong.

But it’s all part of the game and even if you send Sam to a horrible death because of your poor choices, you still get the chance to start over from a check point and try a different route. Even more, since I mentioned The Walking Dead adventure games earlier, you also get, at the end of the day, a summary of what happened and a comparison between your choices and those of other players. Really interesting and I absolutely loved those bits of information! From them, I also realized that different choices would’ve opened brand new story lines, so the choices you make do matter and influence the way this game plays out. And this is always a great thing.

I am a sucker for anything related to zombies so the game has a bonus with me from the beginning. However, since it’s a text adventure that starts our fairly slow and has some weaker moments, this will definitely not be a game for everybody. It’s also a game that you will play over the course of several days (unless you want to start messing up your device’s time settings), so you will have a bit of waiting to do and time to invest. But this is how the game is meant to be played: in short bursts that are usually intense and interesting. 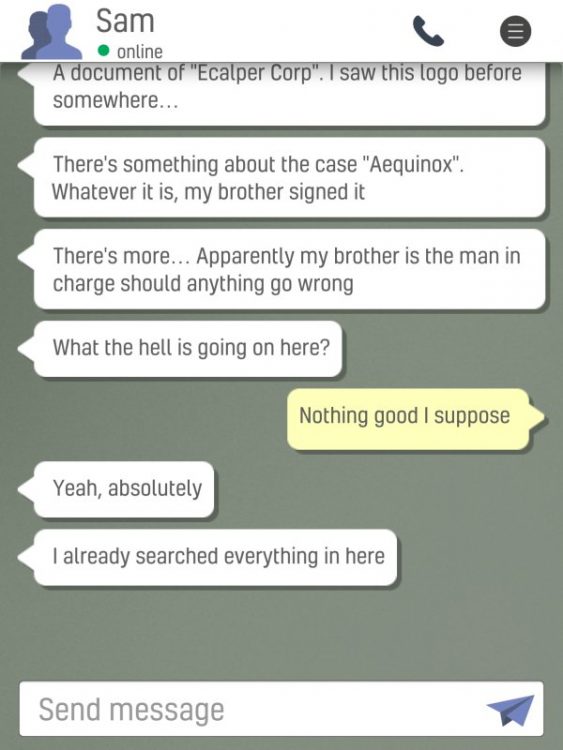 Although not always intense and interesting and despite its slow – almost frustrating – start and less than stellar writing, Anybody Out There: Dead City is a good adventure game. You have the feeling that the choices you make matter, they are usually extremely difficult choices, sometimes with unexpected results. But what matters the most is that eventually you will start caring about Sam and his adventures – his fate and ultimately his life and I believe that’s one of the biggest achievements video or mobile games can get.

If you feel that you have what it takes to guide somebody out of a zombie apocalypse, without leaving the comfort of your chair (and also while at work *wink* *wink*), Anybody Out There: Dead City will definitely test you to the limit. It’s a good, fun game with unique gameplay mechanics and enough plot twists and wow moments to keep you asking for more.

Anybody Out There: Dead City is available on iTunes [get] and Android [get] for just 99 cents.