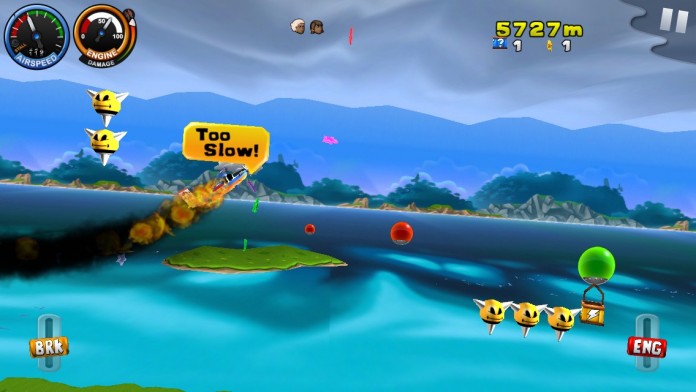 Endlessr runner games have managed to become quite successful on iOS and other mobile devices thanks to how the gameply experience is designed. These games don’t really require gamers to learn anything beyond some simple mechanics, which, in some cases, manage to keep the game fresh and fun even after many hours of playing. It’s rare to find an endless runner that requires more involvement on the gamers’ part to become really enjoyable. Any Landing is such a game. An endless runner game that may not click right away and only becomes rewarding and fun after a few hours. This fact alone sets it apart from most of the games of the same genre.

In Any Landing you will have to fly a plane across the screen and land in various airports to pick up more passengers. During the course of the game you will also be able to purchase upgrades and better aircrafts, as in many other endless runner games. The game’s controls take some time getting used to. The included tutorial doesn’t help much, as it simply explains the basics. To make the plane raise in altitude and slow down and lower in altitude and speed up you will have to tilt to the left and to the right. It’s not the most intuitive control scheme for such a game, something that may be enough to put off the majority of mobile gamers, who just want to play a game for a few minutes before moving on to other titles. Those who stick with the game and learn how to control the plane properly, however, are rewarded with a very enjoyable experience.

The controls aren’t the only feature of the game that requires time to learn and master. The landing mechanics are even more obscure than the controls, since they are never explained. This means that you will be failing a lot of these landings in the first few hours of the game, another things that may put off casual gamers. And just like with the controls, learning to land is something that brings a special kind of enjoyment.

Any Landing is an odd game in the endless runner genre, a game that requires some learning before becoming truly enjoyable. As a console and PC gamers this hasn’t been a problem for me, as I’m used in learning intricate control schemes and obscure mechanics. Casual gamers who just play on their phones for a few minutes on the go may be put off by this learning curve, which is, in truth, not steep at all.