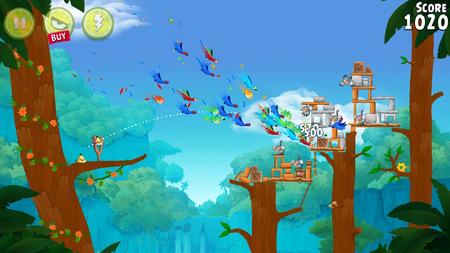 The new update, which is called Timber Tumble, includes 20 new levels and 6 bonus stages set on tree tops, just like the name suggests. The new levels aren’t the only new addition to the game as the Timber Tumble update also includes a new power up which allows the player to send a flock of birds toward a target to deal massive damage.

Angry Birds Rio is the third game released for the franchise. While the basic gameplay experience is not too different from the other entries of the series, Angry Birds Rio includes some unique features that manage to set it apart from the rest of the series, like boss battles and more. The game has also managed to become very successful thanks to the fact that Angry Birds Rio is a marketing tie-in with the animated movie Rio. Other updates have also been released for the game in the past few months, including new stages and more.