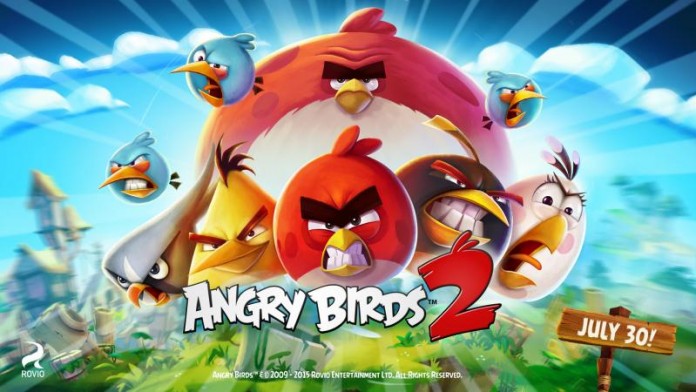 Angry Birds 2 is the twelfth Angry Birds iteration from Rovio Entertainment. That is twelve different versions of the game since 2009. The staggering number puts annual sports titles and FPS titles to shame. Surely, with that many creations of the same property, the enigma, the excitement, would run out. While this massive franchise has creatively spawned theme parks, movies, toys and anything you could possibly imagine, it is clear that the imagination is running dry with this sequel.

The most eye catching part about Angry Birds is the visuals. While running it on the iPad Air 2, colors will cut through the screen with intense saturation and vivid cartoon colors. Angry Birds 2 is a delight to look at. Characters are wonderfully created and animated, each feeling uniquely different in the world’s creative palette. Not once did the FPS buckle from the game’s animation.

The setup for those unfamiliar to the world of Angry Birds is quite simple. Each level is set up like a puzzle but a bit more different than say do X to get to Y. Instead, you have to use certain birds to break down certain barriers. In doing so, you get a mass amount of points, points that are used on a leaderboard to competitively track your numbers. Each time you successful pass a level, you unlock new goodies and a new, more difficult level. The appeal to Angry Bird’s is quite obvious, hence why this series has over three billion downloads. Billion.

Unfortunately, Angry Bird’s addicting game play becomes the most restrictive that the franchise has ever seen. Not only are the levels more linear, as is the path to unlocking the levels but the infamous micro transaction system appears. The game now uses an energy system that replenishes your bird ‘cards’. These ‘cards’ act as lives, and when you run out, you need to use energy to replenish them. This of course brings in the micro-transactions. If you do not feel like paying, you can wait 30 minutes for your lives to redeem or watch a few ads.

Micro-transactions on a free game are not a big deal. I understand the allure to making a free game and allowing people to go in, play the game, and if they feel necessary, to purchase content to ‘enhance’ the game. Unfortunately, Rovio Entertainment does not treat micro-transactions as an enhancement but rather a tether. It will constantly remind you to insert your own money, in order to complete this or this. So, instead of constructively solving these puzzles, you must deal with never-ending ads or simply being punished and not playing at all. The punishment for losing your lives is 30 minutes for each life, totaling up to 2 hours and 30 minutes.

The puzzles have always been the strong suit of Angry Birds, and that is no exception here. I spent quite a lot of time contemplating, scheming and plotting ways to bring down fortresses containing pigs. Spells, a new card that comes to play, are also here, these can rain down multiple bombs or turn entire maps into snow for your benefit. Also, Angry Birds 2 adds bosses. In order to complete the level and move on, you need to completely lower a bosses health using creative solutions. Just as well, Angry Birds 2 has multiple ‘gift’ items hidden in a map, if you hit one with your bird, you unlock a gift for you or your Facebook friend. It is an interesting concept that was nothing more then some mere fluff.

Angry Birds 2 is a sign that things might need to be changed up for this franchise. Sure, the birds and the worlds Rovio Entertainment creates are simply marvelous. Graphics are breathtaking and will capture your eye from the moment you open up a level. However, the game-play is restrained, so much so that each bird feels far too important. The punishment for failing, instead of a level failure, you now have to sit the game down and move on with your day. Are developers really okay with someone sitting down their brain child to move on to something else because they won’t keep feeding a broken system? The linear level set-up is a further frustration. Angry Birds 2 entertainment value just doesn’t warrant your time or hard earned money.