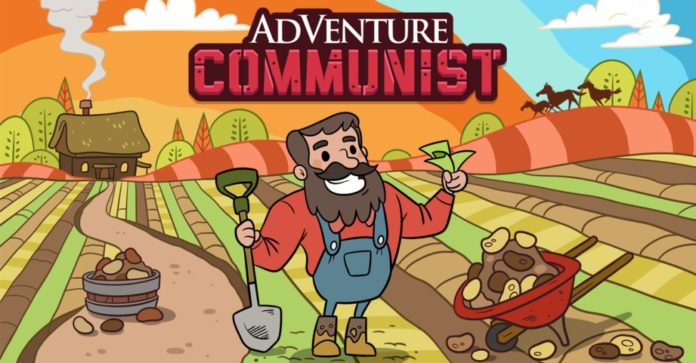 Created by the same team behind the insanely popular AdVenture Capitalist, AdVenture Communist seems to lack a bit in terms of appeal, but does some really interesting things in terms of gameplay, taking the idle game to a new era. And for that alone, this is worth playing.

So if you’re looking for some extra advice on how to get the most out of the game, read on for some AdVenture Communist tips and tricks below!

Keep that button pressed!
You can produce a small amount of items by simply keeping the green button pressed. The more you keep it pressed, the more resources you will produce and the good thing is that this carries on with Time Travel, giving you a huge head start after reset.

So try to always have one hand on the green button as you play, doing everything else with the other hand. Easy like that! 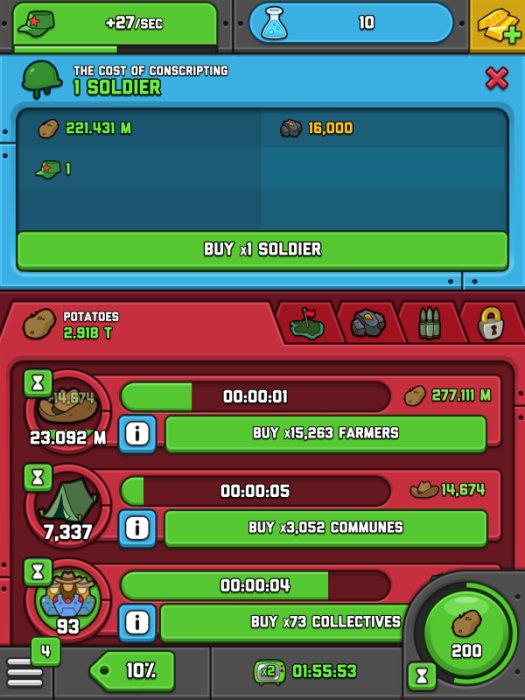 This means that you will lose a bit of science points with all resets, but until you get a ton of science to spend everywhere, you have to do this. My recommendation is to invest in the first two (Potatoes and Land), then move to the later three during mid-game or late game.

Science and experiments are the most important elements in the long run, in my opinion but they will only start to matter once you have at least 500 science to play around with (so you’ll have to time travel a couple of times at least in order to get there).

Look at the description of the experiments and always start with those that increase the amount received from pressing the green button as this is extremely useful early on in the game. Next, start investing in upgrades that increase your rewards without decreasing others. There are honestly so many things available that it’s really not worth the trouble of having to take into account losses. Go for profits only to stay sane!

In early game, you will have to focus on Potato and Land Production – maybe even Ore when you advance a bit, while for late game you should switch your experiments to weapons and placebo because they will matter the most. And by then, you will have a solid production for the first three categories anyway!

Watch ads for double production
You can watch up to 12 ads per day, doubling your production for up to 24 hours. This is obviously extremely important, so make sure that you watch as many ads as you can each day in order to make it easier for you to progress.

Time travel at the right time
You don’t want to time travel too soon, because you won’t get a big enough bonus for experiments and that would make no sense. Always go for the time travel option when progress in the game – buying and unlocking new stuff – becomes very slow or seems impossible.

Ideally, you should time travel when you get high enough bonuses so that you get back to the point where you have time traveled from after as little time as possible.

Upgrade all industries smartly
The game is absolutely crazy in terms of stuff you can and have to buy and upgrade, each new thing being connected to at least a couple of other industries. This is pretty difficult to keep track of, but the golden rule of thumb is to start with the Potatoes and work your way up there.

As soon as you unlock a new thing, work to get at least one of those in order to boost production even more. But always keep an eye on the things you have.

For example, when you unlock Nurses in the Placebo menu, you will need 10 soldiers for 1 nurse. This means that you could run out of soldiers producing bullets for you if you are not careful: so always keep an eye on everything to make sure that you have the maximum numbers working in that area.

The time lapse cheat
If you want to boost your earnings easily, there is the time lapse cheat that you can try. All you have to do is force quit the game, then go to your device’s settings. There, set the time forward by a few hours. Get back into the game and collect the rewards as the game will be tricked into “thinking” that time passed. Rinse and repeat and you’ll progress a lot faster!

These would be, for now, our AdVenture Communist tips and cheats. If you have extra advice or suggestions for fellow players, don’t hesitate to let us know by commenting below.