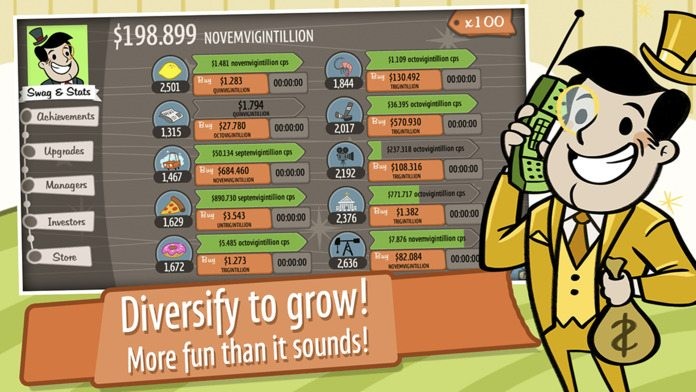 Kongergate have just launched an insanely addictive game on the App Store under the name of AdVenture Capitalist. This game expands the “endless tapping” formula into a smarter and less chaotic game and, in my opinion, is the best option in the genre. But we’re not here to praise the game – even though it fully deserves it – and instead we’ll talk about some AdVenture Capitalist cheats and tips to help you progress as fast as possible and get your business to the next level. And rule the world.

So if you’re looking to make more money, faster, in the game, check out Touch Tap Play’s AdVenture Capitalist tips and cheats below!

1. It’s all about the managers
Really, the managers are pure gold in the game as they keep your business running even when you’re not logged in to the game! So make it your goal to unlock all managers as soon as possible – at least for the first 5-6 businesses and only afterwards focus on the upgrades. Managers are great!

2. Upgrade everything
The more times you upgrade your businesses, the more money you will make. But try to even everything out a bit – there’s no point in paying tens of millions to get your lemonade stand to level 500 when you’ll make a better profit by upgrading the other businesses too. The hundreds of upgrades are for achievements and improvements, but only consider them after you have everything at around level 25 – 50.

3. Keep an eye on the Unlocks menu
The Unlocks menu is extremely important, especially the first page because it shows you the number of upgrades you have to purchase for each business in order to greatly improve its speed or profits. Once you complete a requirement, a new one will be unlocked and you’ll have to keep on going. The Lemonade Stand alone goes all the way to level 6,000, so you have a ton of upgrading to do!

4. Watch ads for double profits
See that green TV set in the lower right corner? Tap it, watch an ad and your profits will be doubled for the next 4 hours. Make sure to have that running for you continuously, it will help you a lot to unlock everything and rule the world.

5. Upgrade before the timer runs out
The later businesses, starting with the Hockey Stadium, require quite some time before you can collect the profits. But if you upgrade them a few times right before the timer is ready, you still get the larger chunk of money. So I would suggest you spend your money on upgrades in other areas and only when the timer’s close to resetting, invest in these mammoth businesses.

6. Angel investors are really worth it
After unlocking everything and being filthy rich, you will get the chance to unlock the Investors – they greatly increase your profits and give you access to some upgrades, but you have to sell all your businesses and start over. But that’s the way to go if you want to make even more money, so when you have the chance, sell your shares and get as many Angels as possible – this opens up new possibilities and eventually help you get closer to unlocking everything in the game.

[UPDATE] We have also published a complete guide on the Angel Investors and how they work. If you’re interested, you can check it out here.

These would be for now our AdVenture Capitalist tips and tricks to help you get the most out of this game. Do you have other suggestions? Let us know by commenting below!