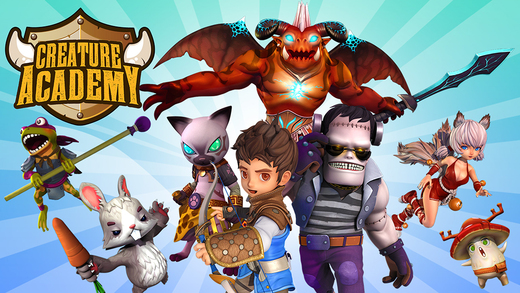 With Nintendo having no intention of releasing Pokèmon games on mobile devices, with the exclusion of spin-off titles like the recently released Pokèmon Trading Card game, many teams have tried to fill this void with titles inspired by the series developed by Game Freak.

The latest Pokèmon inspired title released on the App Store is called Creature Academy. The game developed by Kabam, however, comes with many unique features that set it apart from the Nintendo produces series, like a more action oriented gameplay experience and more.

In Creature Academy, players will have to create powerful teams of monsters, with over 200 different creatures ibeing available for use  like elves, sirens, wolfmen and many others. Once your team is prepped and ready to go, you can send it to explore dungeons to obtain new items, weapons and abilities. The game employs an action battle system where players will have to control their creatures directly so the Creature Academy gameplay experience can be quite engaging.

If exploring dungeons ends up becoming boring after a while, players will also have the chance to fight against others in the game’s multiplayer mode, a mode that can keep fans of Creature Academy busy for quite some time.

Creature Academy is now available for download on the App Store.