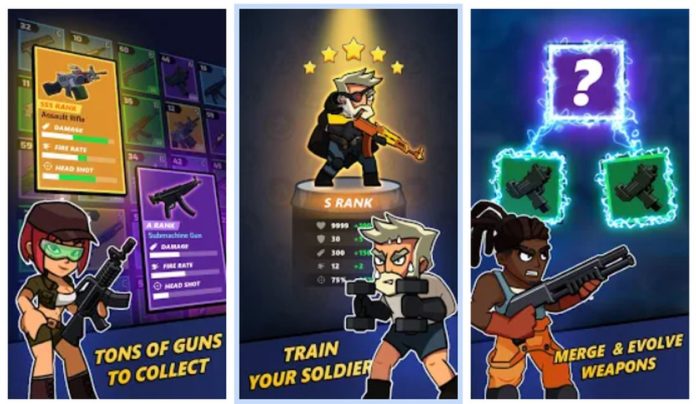 Despite the fact that it’s not really an idle game (at least not from the beginning), Zombie Idle Defense is fun and charming and today we’re here to help you get better at it by sharing a bunch of Zombie Idle Defense tips and cheats in our complete guide below.

While things can be considered pretty much straightforward here, it doesn’t hurt to talk a bit of strategy and this is exactly what we’re doing. In today’s guide to Zombie Idle Defense, you will learn how to play a better game, how to unlock all heroes and have even more fun, basically.

So let’s not waste any time and instead, let’s check out the tips and tricks below!

Use your Hero skills at the right time

Each of your in-game heroes has a different skill which can really change the tides of the battle and make the difference between a 2-star and a 3-star victory. Of course, in order to get the most out of the skills, you have to use them at the right time.

You also must know exactly what each skill does and – very important – how long it takes to recharge for a new use.

For example, the Punker’s first skill is the grenade which deals damage to a small area, but recharges quickly.

Squirrel has more powerful skill that basically wipes out the entire screen of enemies, but it takes longer to recharge.

So make sure that you use each of the skills of your heroes at the right time, when they deal the most damage possible to the highest number of zombies – ideally the ones that are toughest to beat with regular weapons.

Upgrade your Heroes (during battle too!)

Leveling up your heroes is vital if you want to make sure that you can keep up with the growing numbers of zombies attacking your barricades, but fortunately you can upgrade them during the battle as well.

As well as you have the money for an upgrade, you can simply tap the hero icon at the bottom and level them up. Of course, you can plan things out a little better and see what effect each of the upgrade has by leveling them up from the main menu.

When it comes to leveling them up, you should always try and have them all upgraded to the same level instead of focusing on turning a single hero into a beast and ignoring the others.

Weapons can also be upgraded, using the scraps that you collect during the missions or as various in-game rewards. But there is a bit more to take into account when it comes to weapons than simply upgrading them as much and as often as possible.

For starters, each Hero has a specific type of favorite weapon: some prefer pistols, some prefer SMGs and so on. This should be taken into consideration and you should always equip your heroes with their favorite type of weapon, as this gives that particular weapon a really nice and useful bonus.

Only when you are sure that you have a hero’s favorite weapon available (ideally the best weapon in that particular category too), you should start investing heavily in upgrading it and using scraps to level it up.

The only exception is, in my opinion, Big Daddy who favors the shotgun which, in most cases, is pretty much useless because it only has a very short range.

Even better, you will soon be able to fuse weapons in order to increase their quality and provide a massive boost to its stats. Most weapons in the game are obtained at C rank, but can be upgraded a few times.

In order to fuse weapons, you will need three identical weapons of the same rank. Fortunately, the level of the weapons doesn’t matter, so there’s no need to level up duplicate ones.

But you might have to fuse a lot and wait even more until you collect the right amount of items to fuse: you will need three B-rank weapons to fuse them into an A-rank, and you will need two A-rank ones to fuse even further.

Get more weapons in the shop

Getting new weapons is not incredibly easy, but you will receive a few free ones as rewards for progressing through the game, usually as star level rewards or from the various crates that you can purchase from the shop.

However, you should always keep an eye on the shop itself because at the bottom you will have a selection of weapons that you can purchase directly. These are pretty expensive for sure, but if you need a particular weapon to complete a fusion, then it could be money well spent.

We don’t recommend constantly buying weapons this way, but it helps a lot if you need a particular one, so check out the store constantly!

Use the power-ups when you really need them

There are five different power-ups that you can use in Zombie Idle Defense to increase your chances of keeping the hordes of zombies away. These are:

These power-ups are difficult to get but, as you can see from their descriptions, they are really useful. However, we would recommend to only use them when you need to get 3 stars in a very difficult stage (like a zombie boss stage or a mini-boss one).

Because they are so difficult to get, it makes no real sense to use them in regular stages: these can be easily defeated if you simply upgrade your Heroes’ levels and weapons and use their skills smartly.

How to unlock more heroes in Zombie Idle Defense?

Unlocking new heroes in the game is not the easiest, nor the fastest thing you can do, even though you unlock 4 slots in your team relatively fast.

Basically, you will unlock new heroes by being active and playing the game constantly. The first one you unlock is Squirrel, which joins you at stage 10 in New York. You will get Captain Redeyes after playing the game for 7 days, Big Daddy after beating the New York stage and so on.

You can also get heroes by purchasing various packs with real life money in the game – including crates that reward you Hero cards randomly.

Get that Cannon ASAP (vs Perks)

As soon as you unlock the Research function in the game, make sure to unlock the Turret – it basically acts as a brand new Hero, choosing constantly at zombies and helping you a lot.

The turret itself starts out with some pretty poor stats, but it can be upgraded as you get more research points and will become a real beast later on, having an important contribution in defeating the incoming zombie waves.

The biggest problem with the cannon is that is shares the same currency needed to but Perk cards, which are also useful, giving you massive boosts to various weapon types.

However, because of the randomness coming from Perk cards (you don’t really know what you’re getting next), I would recommend focusing early on on the Cannon and only when you have a nice amount of research points, move to investing in Perks as well.

Tap the mailbird flying around

Every now and then, you will see a bird dressed in a mailman’s uniform flying across the screen: make sure to tap it when it’s there because it will reward you with some free goodies. Not a lot, but every little bit counts!

On some rarer occasions, you will also get a flying drone. That is also a must tap item, which will reward you with much better loot, including power-ups, but the downside here is that you have to watch an ad to get it. Tottally worth it, though.

Watch ads to increase your income (but be selective)

Speaking of ads, you should know that after each successful mission, you are given the option to watch one and increase the amount of a specific reward: either the regular coins or the scraps and even the premium currency.

Keep an eye on this offer and don’t hesitate to take it if you need one type of resource and you need it fast. Also remember that the rewards are better the more advanced a stage is, so to max out your gains, grind on the latest stage you can easily beat.

Replay stages if things get tough (or to master them)

Zombie Idle Defense is a game that requires a certain amount of grinding: you will reach a point where zombies will be very difficult to beat. This usually happens soon after clearing New York City.

This is when you should get back and replay stages that you have already completed. Play them over and over again in order to grab some nice rewards and have enough resources to upgrade your characters or weapons.

If the overall power of your team has increased drastically, you can also try to approach levels that you haven’t managed to master (get 3 stars) in the past. This is really helpful as it will eventually increase the amount of resources you get in the idle mode.

Don’t forget that, as you collect more and more stars from completing various stages in the game, you can collect various rewards. Tap the top left icon under your player profile and collect them all!

The game does become idle eventually, after completing the first 30 stages in New York City.

This is when you can start collecting City Tax (resources that accumulate even when you’r enot actively playing) and also the daily reward each day.

Once you beat stage 35 in the game, you will unlock what is actually the idle mode of the game and practically a brand new game, with a few rules of its own:

You can auto battle constantly, leaving your troops to fight waves of zombies, triggering auto skills and collecting resources. Your heroes can be defeated, but they will keep going, with the game resetting to the previous stage.

There is also a prestige type here, resetting your progress and starting over with extra research points to make your heroes better. A nice addition to the main game, offering even more variety!

These would be our Zombie Idle Defense tips and tricks for today. If you have some extra advice for fellow players, don’t hesitate to let us all know by commenting below.