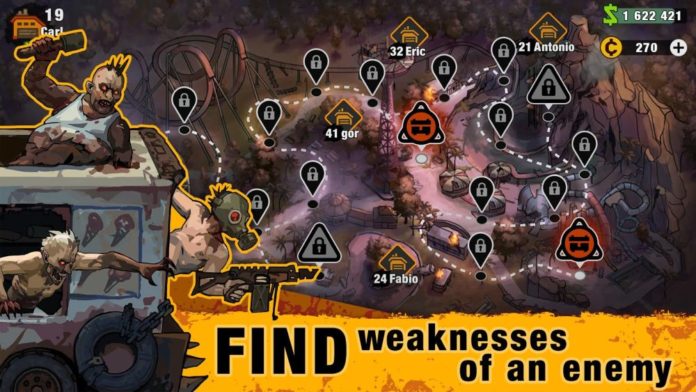 The Arena in Zero City: Zombie Shelter Survival is where the real challenge is at! Competing against other players for supremacy and top rewards, you definitely want to always rank high when taking part in the Arena aka Massacre challenges.

And we’re here to help you by sharing today’s guide to the Zero City Arena / Massacre so that you win all your fights and grab all those cool rewards. So let’s get this started!

When you tap the Arena button on the map and go the Massacre screen in the game, you have two participation options: for food or for tickets. But which one should you choose?

It all depends on what you want to achieve. Generally, the Tickets Massacres hold the better rewards, but they’re usually where the biggest competition is at. You also need Arena tickets in order to take part (more about this later)

The rewards here are impressive for ranking in the top 3: between 150 – 250 Arena Store credits, 1 crate and the chance to win the Grand Prize, the Greatest Arena crate. You also get a bonus of 60 credits for fighting all battles:

The Food Massacre can be played if you spend regular food, but the rewards are also lower. However, it’s easier to rank higher here since you will be generally matched against similar or weaker opponents.

The rewards for ranking in the top 3 are not as impressive as the ticket arena, as you can only earn between 60 – 100 Arena Store credits for placing in the top 3, but you can also win an arena ticket for ranking first, which is really useful. However, you don’t get a shot at the Greatest Arena crate (but still get a regular one):

Pro tip: You can still get a lot from the Food Arena Massacres as well, if you have a ton of food standing by. Even if you don’t, ask your alliance for food: most people usually have a surplus of it and send it gladly. Put it to good use in the Arena!

With the credits that you earn from the Arena battles, you can visit the store where you can purchase some extremely important items or even crates. You need a ton of credits for a crate (or for the items themselves), but the more active you are in the Arena, the faster you’ll get those rewards.

Zero City Massacre: How to get Arena tickets

In order to get more Arena tickets, you have to be very patient, generally. If you are not, you can purchase them at any given time for 19 Premium currency each.

However, if you are patient, you can get Arena tickets from clearing the crowds of zombies whenever they appear on the map (you get random numbers of tickets from that, but don’t expect too many).

You can also get 1 Arena ticket for each Food Massacre that you rank 1st in, as well as for completing the Movie Theater daily mission (it involves watching ads).

Setting up the perfect team is vital to max out your chances of ranking 1st in each Massacre you take place in. We have discussed this in detail here, sharing the perfect team setup based on the number of fighters you can send to battle.

However, there is an extra layer of strategy here since you get more points for winning battles against higher ranked players and fewer for beating those behind you.

Therefore, you should plan out your attacks so that you always get the maximum number of points each time. Here is how I approach things:

If I’m not certain about the outcome of some of the other battles, some strategizing comes into play. If it’s just one battle I am unsure of, I usually start with that: if I lose it, I will get extra points from future battles as my rank will be lower. If not, I will be on a winning streak anyway.

If there are more battles I am unsure of, I always play them first – the impossible ones first, then the one I am uncertain of.

The main point here is to know that you have 5 battles. Decide how many are obvious wins and fight first the ones that are not, in order to increase the points gained and rank higher. This is the way to do it!

If you want to improve your game even more, don’t forget to check out our general guide for Zero City: Zombie Shelter Survival. There are many useful tips and tricks there that will help you progress faster!

Now back to the Arena, if you have some additional strategies that you’d like to share – or maybe some questions, don’t hesitate to let us all know by sharing a comment below.