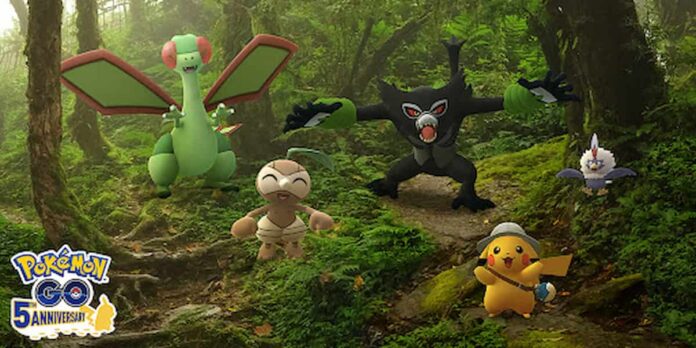 To celebrate the release of its new film, Pokémon the Movie: Secrets of the Jungle, the developers of Pokémon GO, are launching a new limited-time research event called Secrets of the Jungle. The event will introduce the new Pokémon Zarude-The Rogue Monkey, which can be encountered and captured by completing the event’s limited-time research. The event will run from October 1st to October 10th.

RELATED – The Most Rewarded Quests in Pokemon Go (List)

Zarude, the Rogue Monkey Pokémon, will make its Pokémon GO debut as a reward for completing the Special Research storyline of the event. Aside from the mythical Pokémon, the Secret of the Jungle is expected to include a wide range of items.

Secrets of the Jungle event: Features

• As previously stated, players will be able to research and encounter Zarude, the new mystical Pokémon. This is the first time the grass and a Dark-type Pokémon have made an appearance in the Go universe.

• Hoothoot, Combee, Drilbur, Cottonee, and Dwebble can all be found in the wild. They might even come face to face with the legendary Larvitar if they’re lucky. The excitement level is at its peak, right?

• During the event, similar research tasks for Audino, Rufflet, and other Pokémon will be available.

• Explorer Pikachu, including the shiny version, will return to the wild.

• The style shop will have free Avatar items such as the Adventure Hat and the Wailmer Water Bottle.

• Pokémon from the film will appear in the world of Go, including one-star raids like Larvitar, Roggenrola, Foongus, and Rufflet, as well as three-star raids like Lickitung, Chansey, Pinsir, Ludicolo, and Flygon.

FOR YOU – How to catch Smeargle in Pokemon Go?

The film will be available globally on the Netflix platform on October 8th. Interested fans and other Pokémon can watch the film by subscribing to the streaming platform. Are you eagerly awaiting the upcoming Pokémon Go Secrets of the Jungle event and Netflix film? Do let us know in the comments section below!