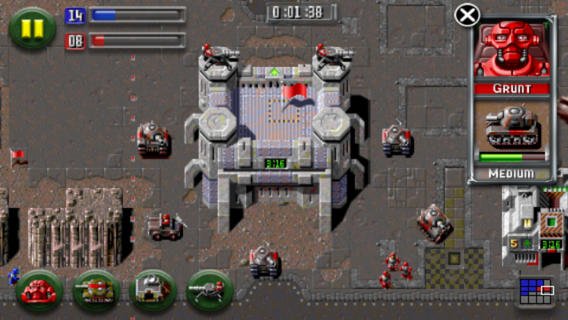 I don’t know about you, but I totally love those old school strategy games and Z The Game for iPhone and iPad is such a title. And now, the classic Bitmap Brothers game has become even more fun thanks to the latest update that was just released and brought multiplayer to the table!

By taking control of an army of six different types of robot soldiers, including the faithful grunt, you will slug it out in a land grab for space supremacy across five planets, each with unique terrain, ranging from arctic wasteland to lands of fire and lava. Whilst each of the robot soldiers is capable of performing up to forty different actions, they possess a unique personality trait, adding another dimension to the tactical gameplay; will they carry our your orders and march into the jaws of hell, or will they chicken and run?

You can play Z the Game in multiplayer over Wi-Fi on five dedicated maps, you can play against Game Center friends and, of course, you’ll do your best to win them all. And if you wanted some extra improvements, this latest update also brings increased resolution for iPhone and iPad Touch.

In case you haven’t done so already, you can purchase Z the Game for $5.99.

Z The Game Gets Multiplayer Mode in Latest Update