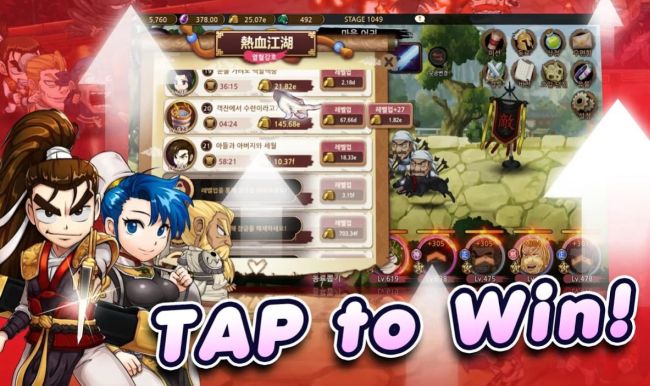 In today’s article we are going to cover all of the Yulgang Rush tips and cheats that we have gathered so far and share them with you so that you can pass more stages and get some more powerful heroes!

This is a super simple game with easy mechanics which doesn’t require a lot of crazy time invested to have a good time in an idle game. Because of these simple, yet super efficient game mechanics, the entire game will be pretty fun and easy to play, so if you want to learn everything there is to know, you came to the right place!

So let’s not waste another second and dive right into the Yulgang Rush tips and tricks right here below and check out everything that you need to know about the game and how to pass more stages!

This is one of the most – if not THE most important feature in the game. You will be able to unlock the other 3 character slots by tapping on the empty slots in the bottom right corner of the screen. Unlocking one of the slots will cost you 300 Rubies, and if you have progressed a little in the game then you most definitely already have collected a few Rubies.

Use them to unlock all of the slots, because it will help you in the long run, and unlocking them is a one time only process, so once you have unlocked them, you will have them unlocked for the entire game.

My tip here: I unlocked the slots as soon as I had enough Rubies, but if you think that you will do fine without doing that, then you can wait a little and save the Rubies to unlock them at a later time – however, I think that the sooner you do it, the better, because you will be able to advance faster.

Tap on the treasure holder

Sometimes you will notice an odd figure among your troops, which is carrying something like a triangle shape above it. The person will also have the text Touch written there, so try to tap on that whenever you see it appearing on your screen.

This treasure holder will give you either a big amount of Gold when you tap on him, or pop up a new window which will offer you to watch an advertisement and give you some other goods, such as Rubies, in exchange for watching that ad!

I definitely suggest that if you want a Gold boost or any other kind of currency boost, that you do this, because it will give you some free loot!

Skills are important, but not really

If you like playing the game idly, then I would definitely suggest against wasting your Rubies on unlocking the skills. That is mainly because if you play this game idle then you will not be really active in the game to activate them or anything like that.

So early on, only focus on using the one that you have unlocked already, do not unlock the new slots just yet. If you do decide that you are playing the game more active than not, then you can unlock the other two, but think about it, because if you don’t, it’s no use for it.

I personally unlocked it, and regretted immediately after because I didn’t really use the skills for progressing since the heroes are doing a pretty fine job on their own – and I play the game more idle!

Recruiting more heroes is pretty easy, and all that you will need is Entry Tickets to refresh the heroes. Since it is so simple, all that you need to do is tap on the Recruit button in the bottom side of the screen (which is the Inn basically) and there you will see two heroes.

The heroes which will appear here will change constantly as you refresh them with Entry Tickets, and whenever you see one that you like, you should go ahead and recruit it! You will have free 3 tries to recruit it, and if you fail, then you can purchase the hero straight up with Rubies.

There are a couple of things which I would like to point out here:

– Always try to recruit every hero which you get for free, including the 1 star and 2 star ones, because you will have another use for them (if you get them for free that is). Do not waste Rubies on recruiting heroes, only 4 star and 5 star ones if absolutely necessary.

– Recruit the 4 star heroes and 5 star heroes with Rubies if everything else fails – I know it is expensive, but it is an expense well spent!

– You can only stack up a maximum of 5 free Entry Tickets, so anything above that will not count! Try to use them so that they will refresh all the time. Don’t save up the Entry Tickets, unless there is a hero which you are saving up Rubies for.

Don’t forget to level up the heroes

The heroes can be leveled up by tapping on their portrait in the bottom right corner of the screen. There you need to have them added to your team, and if you do, you can level them up by using Gold.

Try to level up the strongest heroes first, and then level up the rest of the team too. Also, when you level up the heroes try to keep it somewhat equally distributed among them, because it will make it easier to pass the stages. If a hero is very far behind in levels from the rest, it will be the first one to die and it will also do no damage – so it will be basically a wasted spot on the team!

My tip here: I always have the 5 star heroes leveled up first, then I upgrade the 4 star ones, but never have a gap of more than 30 levels between them because it will be super obvious when you play, that your weakest heroes will have no impact.

So I always make sure that my heroes are pretty equally leveled up before I do anything else.

Upgrade the Adventure to get free Gold

In the bottom left corner of the screen you will have a chest with the text Adventure underneath it. This will give you some free Gold over time, and if you level these up it will grant you more and more Gold.

Try to unlock at least these, and always level up the highest ones (the ones which give you the most Gold over time) because they will be a good source of income for when you are in dire need of some upgrades to your heroes.

In the upper right corner of the screen you will have the missions. The Mission tab will have two sections, as follows:

– Challenge Missions: the Challenge missions are like achievements, and they will give you a one time only reward. These will be super useful, so try to give them a quick read and whenever you have a chance to complete them, do it.

When you have all the heroes you wanted, upgrade the Secret Tome

Once all of the heroes which you have are 5 star heroes, you can save up on Rubies and start investing them in the Secret Tome. This is a tab which will let you purchase some permanent buffs for your heroes, so if you want to have a truly stronger team, then this is a good investment to make – only after you gathered all the 5 star heroes you wanted.

In my opinion you should first increase the Superior Training Center which boosts your heroes’ ATK, then check where your team is lacking and buy those upgrades. Another good upgrade would be the Silver Pickax, which gives you increased Gold production!

There are quite a lot of Tomes that you can purchase, so just give this a quick look once you got all your wanted heroes and you’ll be good.

Do the Dungeons with your idle heroes

There will be several dungeons in the game, which you can attend with your idle heroes! Try to always do all of the dungeons which you can every single day, because there are limited entries per day, and they will give you tons of rewards, from Rubies, to Gold and other useful items!

Remember how I mentioned earlier that you should always recruit for free all of the heroes that you see? Well, that is because you will have the possibility to sell them after! You are recruiting the heroes for free, and when you sell them you can sell them and gather some resources instead!

Sell the 1 star heroes and 2 star heroes which you recruit, at least some of them, but make sure that you keep a few to send them into the Dungeons to complete them for you!

These would be all of our Yulgang Rush tips and tricks that we have for you right now! Do you know some more useful game tips and strategies? Feel free to share them with us down in the comments section below!