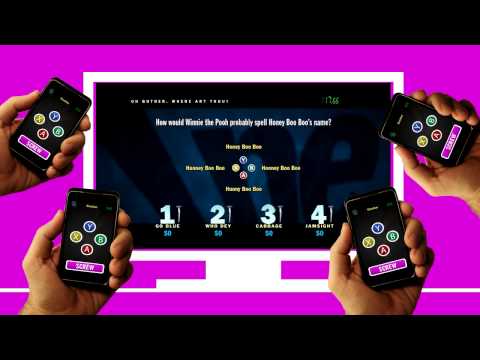 The base You Don’t Know Jack Party game is free to play with 30 additional 11-question “episodes” available as in-app purchases. The game is played with one iOS device acting as the primary display for questions and up to four other devices, using the (also free) Jackpad app, acting as controllers for buzzing in answers.

For players who want an even livelier party experience, You Don’t Know Jack Party can also be hooked up to an Apple TV-connected television using AirPlay. Jackbox Games’ general manager Mike Bilder has also confirmed that You Don’t Know Jack Party is just the first of several games they are developing which will be able to utilize Apple TV and AirPlay in conjunction with smartphone devices.

Harry Gottlieb, the founder of Jackbox Games and creator of the You Don’t Know Jack series, explained in a You Don’t Know Jack Party release statement that one of the developer’s core goals is to help players have immersive and engaging party sessions with each other and You Don’t Know Jack Party helps them do exactly that: “We believe that the kinds of games we make are the most fun when played on the couch with your friends and family. So along with our other mobile games, we’re looking at every technology possible to allow us to create experiences that get players having fun together.”

To see You Don’t Know Jack Party in action, check out the trailer below.