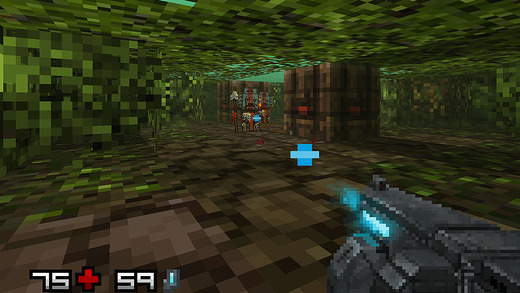 Xibalba for iOS is a FPS which is heavily influenced by the past classic game Quake. The game involves shooting your way through weird creatures who would like nothing more than for you to be killed. The game mechanics are a key feature, and once you get used to this you will start to make some serious mess yourself.  If you happen to be unprepared for killing hoards of demons from an ancient Mayan civilization with a combination of futuristic and present armory then this Xibalba Cheats: Tips and Strategy Guide should help you through.

The game mechanics are very simple. There is a guide at the start of the game which prompts what areas of the screen to tap or move across in order to make the character move and shoot. Although simple enough, the difficult element to this is combining movements. A good example of this is turning and shooting. This is very important when facing an enemy as they will move and your aim depends on moving the gun either left or right. If you need to shoot whilst moving the gun then it is best to use two fingers simultaneously.  This will enable you to move the character with your left hand at the same time allowing you to avoid attacks as well. However you can also use both hands and opt to keep the character still. This can be effective with some enemies which are not as agile.

Keep an eye on your health, this might seem like an obvious tip however it is easy to forget when facing a lot of enemies at once. In order to gain health there are health packs scattered along each level as you make your way along. Therefore it is best to search each corner of the level in order to find them, as they are strategically placed. They are often placed within a corner so you should look carefully as time taken to find these will ultimately allow you more game time.

Ammo works on a similar basis to health. Ammunition will be placed along each level as well as guns. If you happen to find ammunition for a gun you don’t have start appearing then this will mean that this gun is somewhere within this level and that more than likely you have by passed it. Also the amount and type of ammo distributed in the game h=can help you tactically decipher what gun to be using. If the level is heavily supplied with shotgun ammo this will mean that more powerful enemies lay ahead. This way you can use this tactically to allow you to equip yourself with the most suitable weapon.

4. Plan of attack, keeping your distance and cover

If you see an enemy up ahead you can try to plan what the best weapon to use or where the best cover is before they see you.

You can often see enemies in the distance before you approach them and trigger their line of sight you can shoot them from a distance giving you a greater chance to avoid their attacks.

When enemies fire a weapon at you try to use walls as cover, by back tracking or moving behind an object for cover will help to keep the character out harm’s way. You can also use this method to swiftly move away from a wall to shoot and then move back to stutter your attacks and to become more elusive.

Weapons play a big part in this game. Knowing which one to use, or which ones to save can help you advance through quicker, by allowing you to take on harder enemies with more ease. The general rule is the bigger the enemy then the more powerful and harder they are to kill.

Sometimes the game becomes difficult to navigate around. This is due to the level design and everything looking very similar. There will be times where you may become stuck in regards to where to go. A good method to use is to kill all the enemies you see as an indication of an area that has not been covered will be to see a new enemy.