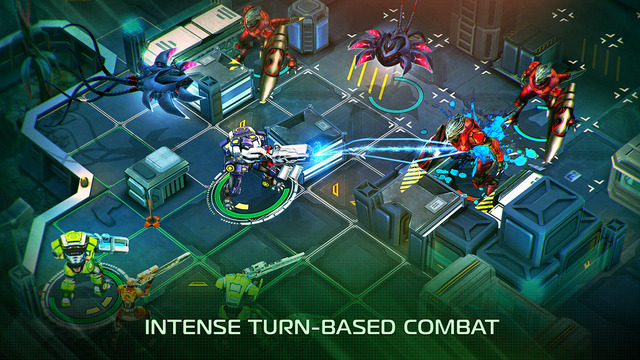 X-Mercs is a tactical squad-based shooter built to be played on the go! Taking heavy inspiration from X-COM, a hostile alien force has descended upon Earth and now it’s up to you to command a squad of elite mercenaries! Our X-Mercs cheats and tips will help you make every decision count. With superior tactics and gear, you’ll be able to take down the aliens with no problem!

So what are we waiting for? There’s a challenging and addicting game to dig into, so let’s get started with our X-Mercs cheats, tips and tricks strategy guide!

Every decision counts in X-Mercs! Strategize and plan ahead to avoid any future problems. You’ll need to take good care of your mercs as improper positioning can really hurt them, if not outright kill them. Always take advantage of cover. Any kind of obstacle or debris on the field can be used as cover, but be careful as some of them can even be destroyed. Half cover is denoted by a red shield – this means that your merc will take 30% reduced incoming damage. Full cover, indicated by a green shield, gives 50% damage reduction.

Never leave your mercs out of cover. During your turn, if you need to move your squad around, always move in between cover spots. Try to position your squad so that you’re never without another cover spot within arm’s reach. Even being in half cover can make all the difference.

Each weapon type will perform better or worse depending on several factors. Knowing the ins and outs of your squad’s weapons will help you take down enemies faster, so it’s important to learn them. Keep in mind that you don’t have to commit to a shot – you can tap on an enemy to see the predicted outcome of the shot but you don’t actually have to go through with it.

Let’s take your starting weapons for example. The shotgun deals massive damage when you’re up close and personal, but suffers a huge accuracy drop off with range. The sniper rifle deals excellent damage at far distances, but also suffers accuracy penalties when targets are too close or at extreme distances. Positioning is key, and remember – don’t forget about cover!

If you’re moving short distances or you’re just taking precautions, be sure to spend your last AP on sentry mode. In certain situations it’s sometimes easier to let the enemy come to you, especially if you’re in an area with a lot of cover. Have your squad enter Sentry mode and laugh as the enemies try to advance only to get mowed down!

On that note, be warned of explosives like grenades! Explosives deal splash damage and ignore defense bonuses from cover. This means that if you bunch up your squad in the same place, an unfortunate grenade could mean certain doom for you. Thankfully though this works both ways! If you’re having trouble dealing with long-range enemies that refuse to budge from a cubby hole, smoke ’em out with a frag.

Early on it’s going to be tough for you to acquire materials to manufacture new gear. The way it works is that certain regions have certain materials, but in order for the region to even be eligible to drop that material, it must be explored to a certain degree. To “explore” a region, you need to clear multiple missions on it. Consider that some of the early gear requires five or so of these materials, it’s probably better to just buy the gear outright. Your command center generates money over time anyways, so don’t worry about getting stuck with no money.

That’s our guide on X-Mercs for now. If you have any other tactics or strategies you’d like to share, let us know in the comments below!