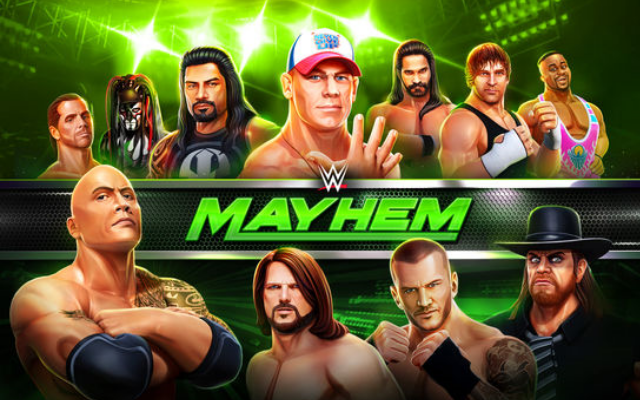 The WWE comes to your mobile device in WWE Mayhem, the premiere wrestling game featuring all your favorite WWE superstars! John Cena, The Rock, Brock Lesnar and more are all here, and you can build the ultimate team of the best WWE wrestlers. Take them to the ring where you get to control the action!

Throw light punches, hard hitting heavy attacks, and of course launch signature moves to really get the crowd going! Our WWE Mayhem cheats and tips will show you the inner workings of the fighting system.

WWE Mayhem is a fast and furious game, so there’s a lot to cover about offense, defense, classes, and more, so let’s get started with our WWE Mayhem cheats, tips and tricks strategy guide!

We know this is WWE and wrestling is all about pure power and beating your opponent into submission, but if your opponent is blocking DON’T follow through with a combo! If your wrestler completes a normal combo on a blocking opponent, they’ll be tired for a second after the combo is over, leaving them completely open to counter attack.

The second you hear the low thuds and the white flashes of blocked attacks, immediately drop the offensive and wait for your opponent to lower their guard.

Keep in mind this works on them too! If your opponent is throwing out punches in a blinding flurry, try blocking for an extended amount of time. After they complete a full combo on your blocks, they’ll be stunned, so take advantage!

Keep the class circle in mind!

Each wrestler in the WWE belongs to one of the six classes, and each class beats and is beaten by other classes. Brawlers beat Wildcards, Wildcards beat Technicians, Technicians beat Powerhouses, Powerhouses beat High Fliers, High Fliers beat Showmen, and Showmen beat Brawlers. When your wrestlers has an advantage over their opponent, they’ll gain a small but substantial boost to their stats, giving them the upper hand.

Try to always pick favorable match ups for your wrestlers, but most of the time you don’t have to worry about it. When you’re starting up a level and deciding who’s up first, the game will auto-select the best wrestler for the match.

Before you jump into an episode, you can see a class preview of the opponents you’re going to face up. You can use this knowledge to prepare your team accordingly!

When you have enough meter, you can unleash one of your signature special moves. Don’t just randomly activate though the second you’re charged! Your wrestler can actually be knocked out of a special move if they’re interrupted before it can connect. This also consumes the meter, so be very careful!

Instead of randomly throwing out, the best way to use your special move is to combo into it. Say for example you’re doing a normal light attack combo that has three hits to it. Perform two light hits, then activate your special move to weave into it seamlessly. That’s how you get them!

When you’re building your team of superstars, it’s good to take into account the classes of your opponents, but one more thing you should keep in mind are synergies. Certain superstars, when paired on the same team with other superstars, gain bonus attributes and become stronger in some way.

For example, AJ Styles has a synergy with Kevin Owens. When they’re both on the same team, every superstar on the team gains 5% more critical hit chance. Synergies can really help bring the team together so always keep them in mind.

That’s all for WWE Mayhem! If you have any other tips or tricks to share, let us know in the comments below!