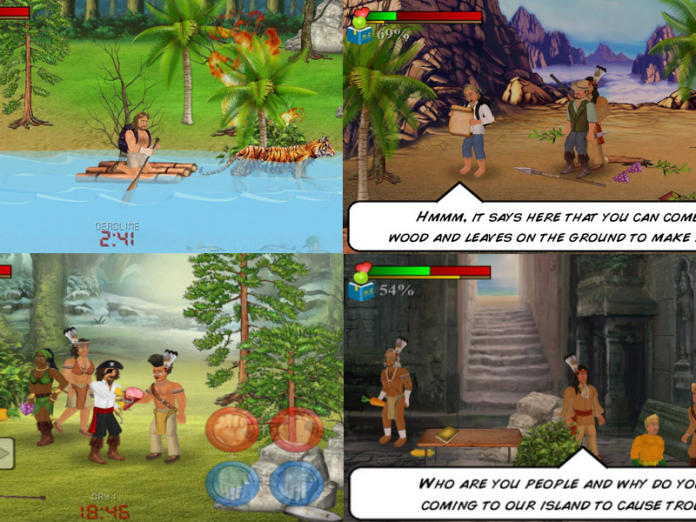 It’s time to survive! Wrecked is island survival game. You’re stranded on an island… but it’s not deserted! You’ll need to compete with the local islanders and other survivors in an effort to stay alive! Wrecked uses the same unique engine that MDickie’s other games do, so that means there’s a lot of things that can happen in this game. Islanders will attack others, build structures, and sometimes even try to attack you, so you’ll need to be alert at all times.

We’ll help you survive with our Wrecked cheats, tips and tricks strategy guide!

Since the controls are a little complex in Wrecked, we’ll go over a quick explanation of the control scheme and how to craft. You have two sets of buttons, each set with a red and blue button. These sets correspond to your left and right hands. You can hold an item in each hand. To attack with an equipped item, you just tap the red buttons. To drop it, tap the blue button. To eat or interact with a useable item, hold down both the red and blue buttons that match the hand you’re holding the item in.

To craft new items, you must combine the appropriate items by holding down both blue buttons. See the + between the blue buttons? That’s where you’ll want to hold if you want to craft. Your character will attempt to combine the items they’re holding in their hands. If it’s a match, in a couple seconds you’ll end up with a new item! You can take a look at the Recipes list in the pause menu.

You’ll notice that the items are separated between Hand Recipes and Ground Recipes. You make the hand recipes by combining items as we mentioned above, but to make ground recipes you’ll need the items to be on the floor near each other first. Position yourself near them and hold down the blue buttons to start combining on the ground.

Your first objective to surviving on the island to find some food. The yellow bar beneath your health gauge is your hunger gauge. When it’s low, your character will tire faster. This means your attacks, movement speed, and general power will be reduced. Furthermore, if you’re attack you will fall over a lot and have a tougher time getting back up. Basically, it’s bad news! Don’t adventure on an empty stomach!

If you let your hunger gauge run out completely, you’ll start losing health. If you explore, sometimes you’ll just find random food lying around, like vegetables and fruit. Eventually though, you’ll need to start hunting. Meat recovers the most hunger back, although you can find it randomly lying around like fruits and veggies too. You don’t have to worry about cooking it.

For some reason though eating food that’s on fire recovers more hunger, but you run the risk of throwing up! Comes with the danger of trying to eat fire, I suppose.

Right underneath your hunger meter is your language completion. You’ll start the game maybe around 50% or so. If you try to talk to some of the island natives, you’ll notice that words are replaced by asterisks. In order to fully understand them, you’ll need to learn their language!

Sometimes random islanders will approach you and offer to raise your fluency a bit. Always take them up on this offer as there is no penalty for doing so! Sometimes you’ll also find scrolls and books lying around. If you pick them up and use them, your character will start reading. Let them read for a while, and eventually you’ll get a recipe hint or you’ll learn a new letter of the language, increasing your proficiency.

You can do this multiple times with the same scroll/book, so it’s easy to master the language! A good place to do this is the Temple in the very center of the island. It’s almost guaranteed that a scroll or two will spawn in here.

The Backpack is a useful item early on. To make it, you’ll need two branches. You can get these by hitting bushes until they break. Combine two of them to make the Backpack. With the backpack in your hand, use it to equip it. Now, if you’re holding an item and you press the drop button, instead of dropping it you’ll put it in your backpack. Press the drop button again with an empty hand to take the item out. Unfortunately you can only keep one item inside, so make it count!

Occasionally you’ll find random boxes and crates lying around the island. If you hit them enough they’ll break and they contain random goodies. No joke – one time we found a futuristic laser gun inside one of them! You might find some awesome weapons in them so always break them open when you find one!

No matter how peaceful you are to the other islanders, you’re going to get on the bad side of someone eventually! Random people will try to assault you, so it’s best to make a weapon as soon as you can once you have your hunger under control. If you can’t find a good weapon lying around, try crafting a sword. You’ll need a hammer to do so. If you combine a hammer and a rock, you’ll turn the rock into a sharpened rock (but you’ll keep the hammer). Combine a log with the sharpened rock to make a knife, then combine the knife with another sharpened rock to make the sword!

That’s all for Wrecked! If you have any other tips or tricks to share, let us know in the comments below. 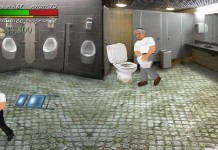