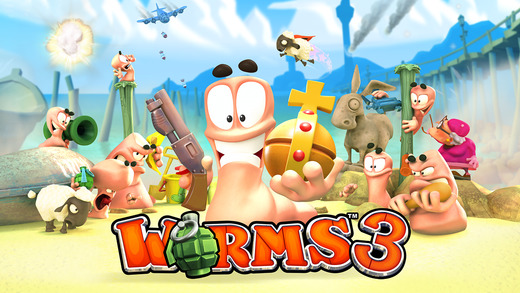 The worms are back with an all new arsenal and an all new game: Worms3! Worms3 takes the turn-based strategy shooting game we all know and love and adds in a few new twists, like playing cards that can change the flow of battle! We’ll help you lead your worms to victory with our Worms3 cheats, tips and tricks strategy guide!

As you learn during the tutorial, playing cards can turn the tides of battle if you play them strategically. With that said, you have the option of enabling playing cards during the single player campaign. I recommend it as they can really help you in a tight spot, but make sure you earn some coins beforehand to buy some booster packs!

2. Take out the enemy worms fast!

Each level has three stars to earn. Stars are awarded based on level completion time, so try to watch the battlefield closely. Plan your moves out ahead so that you don’t take too much time during your turns!

At the top right corner of the screen, you’ll see blue arrows pointing either right of left. This is the wind indicator. The direction the arrows are pointing in correspond to the direction the wind is blowing. The more arrows there are, the stronger the wind is. Certain weapons and items – such as the bazooka – are affected by wind power, so be wary!

4. Use knockback weapons for worms close to the edge!

Keeping an eye on the environment is key to taking down the enemy worms! Always keep a look out for worms that are a tad too close to the water. Get right next to them and use a weapon with strong knockback such as the bat or fire punch and smack ’em good! Once a worm is swimming with the fishes, it’s instant death!

5. Use the ninja rope to get around easier!

Terrain too wonky for you to jump around? Try using the ninja rope! The ninja rope lets you stick to a surface and swing your worm around. It’s great for getting around weird mountains and hills, and is extremely useful for positioning your worms.

A new feature added in Worms 3 are worm classes. There are four classes: soldier, scout, scientist, and heavy.

By default, you will have one of each on your team. You can try experimenting around with the classes to see what fits your playstyle!

Got any other tips or strategies that help you dominate the worms on the battlefield? Let us know in the comments below!