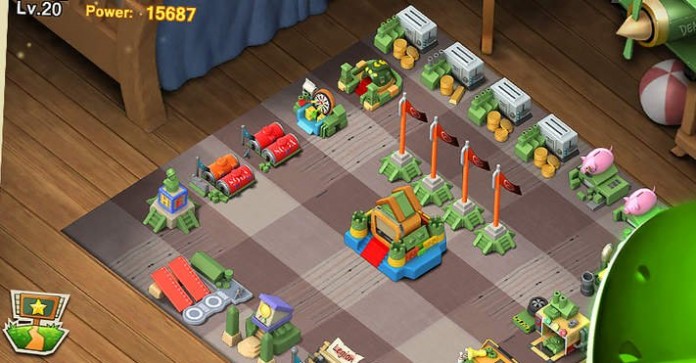 World War Toy is an amazingly beautiful strategy game available on the App Store, a title that moves away from the classic Clash of Clans formula and brings innovation to the genre with new mechanics, awesome graphics and completely addictive gameplay. But we’re not here to praise the game – even though it totally deserves it – but instead we’re here to talk some World War Toy cheats and tips that will help you build a perfect base, defend it like a pro and win all the missions, be them in the single player campaign or in the Arena.

So let’s not waste any time, because I am sure you can’t wait to improve your strategy – and instead, let’s check out the World War Toy tips and cheats below!

1. Upgrade your Flags ASAP
It’s the Flags that decide the size of your army, so make sure you always have the most allowed built and upgraded to the maximum levels. The bigger your allowed population, the bigger your army and the better you can defend your base and defeat the others.

2. Focus on the Arena
Especially early on, you will have a ton of easy to win battles from poorly defended bases. Make sure you take advantage of those and go for the wins for the biggest possible loot. Focus on winning in the arena first, but make sure that you spend all the money you get on upgrades – otherwise you risk losing them when you log out of the game. Use all your Arena attacks and you’ll get a nice head start.

3. Move on to the Single Player Missions
Once you can’t attack any other players anymore, you should change your focus on the campaign. My suggestion would be to get as far as possible without caring to much about star count at first, then return and master all the missions once you have better troops unlocked – or you have them leveled up.

4. Focus on boss battles in the campaign
Every boss battle in the campaign gives you a number of free spins, which in turn give you a chance to win some equipment for your hero, as well as other goodies. These are the missions you should focus on once you can beat them easily, because you need that equipment to improve your hero. So make sure you play them all until you run out of spins: you get free diamonds this way and big chances for extra items!

5. Max out your troops in the defense center
Having a great defense keeps attackers away and if you max out your slots in defense as soon as you start the game, you will keep attackers away for a LOOONG time. I like to scare away the attackers, so I go all in with troops: I start with a row of melee vehicles, followed by machine gunners and mortar guys. Then I go with a row of riflemen backed up by Grenadiers. This fills my defensive lines and sends a clear message: don’t attack me. If you don’t get attacked, you won’t lose any resources and players will usually avoid attacking such well protected bases because they will lose a ton of troops and training takes more time than resources – and nobody wants to wait when there are a ton of easy targets out there anyway!

6. Set your favorite formation, but adapt
The nice thing about World War Toy is that you can easily set up preferred formations, but even though you have this helpful hand at your disposal, you still have to adapt based on the defenses of the opponent. If single player missions can constantly be tackled with similar formations, you will probably have to switch them a lot when attacking other players.

The golder rule of thumb here is to put your melee units (those with 1 square range) in front, then immediately afterwards the long range units – those with the longest range at the end. Behind those, go with another line of melee units in case all troops until them are destroyed and back them up with ranged units again. Sometimes it makes little sense to send your hero into battle (depending on their type), but usually they can prove quite helpful – but remember that having your hero in battle is not a must and there might be moments when you’ll do better without them.

So know how each soldier works and be ready to adjust your lineup based on that. Use common sense and experience and you will have no problems beating others – also watch all the possible replays that you can watch to learn from your mistakes and improve your game.

7. Collect all the rewards
The game is filled with rewards for you: the daily log in bonus, the level rewards, and even the random bonuses that you can spin for after a specific period of time has passed. Then you have the missions, the possibility to ask help from your clan mates – a lot of rewards are waiting for you so make sure you take advantage of all of them because they will help you push forward like nobody else.

8. Upgrade everything to the max
As soon as you have the money, upgrade your Headquarters, then work on your buildings until they reach the maximum level. The rule here is to have everything maxed up as soon as possible: after flags, troops should be your main priority, followed by the Air Base planes, then Defense Center, Barracks and all the other buildings. Go for this order to max out your strength in offense and defense too!

These are for now our tips and tricks for World War Toy. We’re working on more advanced guides, so make sure that you come back often to see what we have added!