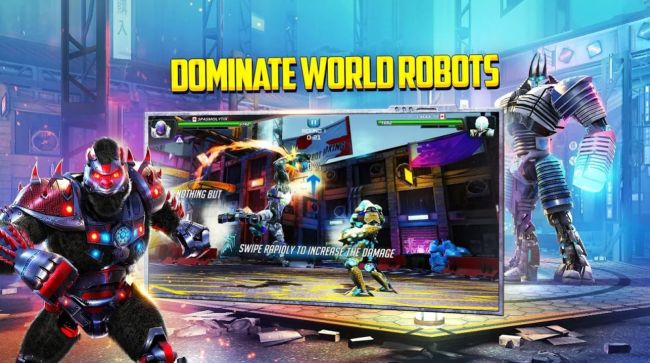 In today’s article we are going to cover all of the World Robot Boxing 2 tips and cheats that we have gathered so far and share them with you, so that you can become a much better fighter!

If you like fights, especially boxing, then you probably wondered how much more awesome it would be to see those massive fighters in a robot suit! Or is that just me? Maybe – well, either way, this game lets you put your own robot in the ring and test their strength in a robot versus robot fight!

And if that is your thing and you want to learn the best tricks there are, then you came to the right place! So without further ado, let’s dive into the World Robot Boxing 2 tips and tricks right now and learn how to win more matches!

Play through the story mode

At the very beginning you will not have a whole lot of things to do, other than try to farm for some better robots. That can be done if you complete story stages and start collecting all kinds of resources and currency to help you strengthen these robots!

When you play the Story Mode and you win several matches you will be able to claim chests containing various goods and robots even! But there are a couple of things that you need to know when playing the story mode, so let me explain:

– The robots that you start an Episode with cannot be changed unless you reset the Episode!

So make sure that when you are starting a new Episode you choose your best robots to carry you through it, even if just temporarily. If you have the strongest robots for this it’s for the best!

When you are fighting in the Story Mode you should always check out the robots’ health because they might not be that great after a tough battle. If that is the case and you still want to win that Episode without starting over, then I suggest that you heal the robots.

You will have it quite easy at start, so don’t worry much about it! However, towards the last levels you might have a little bit of a tough time. So really keep an eye on your “carry” robot’s HP and if it is below 50%, just heal it up.

Basically for some of the fights you can choose the path that you want to take – either fighting a certain robot or two, getting HP regen, or going the other path and fighting a different robot or robots and getting money.

The paths are different in the sense that they give different rewards, but in the bigger picture they are pretty much the same! So just choose at start the path that you need the most (which will probably be money at start) because you’ll need quite a lot of cash to level up the robots.

You can always come back and re-play the Episodes once you have obtained a better robot and then you can try to go for 100% progress if you haven’t got it yet. Also, if you want to get more loot, try to replay the stages and farm for cash or whatever it is that you need!

At start you should just play through and try to pass the stages with the weak robots that you have (because you probably have a couple of 1 star robots) and once you have completed the first two Episodes, then you can try to acquire more robots!

Once you get a better robot, or once you have upgraded the ones you have, you can come back and play a stage again to complete the stage with 100% and get the best rewards! These are a one time only claim, so that’s why you should not miss them!

If you want to unlock more robots then what you can do is try to save some Gold and open some chests which can give you Robots! What I really suggest that you do is save 100 Gold to buy the Premium chest because you have a chance to get some pretty good robots from it!

There are also some robot chests which you can obtain from levels, but you will need to be quite lucky to receive some strong robots from them – usually the rewards are 1-2 star robots if you are lucky.

So I would just suggest that you save up Gold and try to get one of those chests in the store!

Team up robots who have synergy

Every robot will have a synergy with another or with more robots, and that will give them some more useful stats when fighting. You can check your robot’s synergy by heading on to the Robots tab -> Select the robot you want to check -> check in the bottom left corner on the Synergy blue button.

There it will show you the name of the robots which synergize well with it, and you should definitely take advantage of it!

I suggest that you always level up your robots because that will increase their power by quite a lot. It is best if you first upgrade your highest star robots, because they are the most powerful.

You can level up a robot by selecting the materials you want to use and then paying the money that it asks you. It’s pretty simple, and you can upgrade the level of your robots up to level 10! So make sure that you do it with your best robots first, because the more stars a robot has, the more materials it will need to level.

If you need just a little bit of EXP more, then make sure you watch an ad to get the materials because this will not give a whole not, but it is still something!

There will be some free chests which you can claim in game every day! You can find them in the Loot tab and there you will see the first one, which is a chest that you can claim every 4 hours. That chest contains useful items for upgrading your robots, healing them and so on.

You also have the option to claim the daily chest, which can give you along with robot upgrade items, some 2 star robots! If you choose to watch an advertisement you can speed up the 4H chest by 30 minutes, and the daily chest by 1 hour.

So if you are in a rush to open these chests, the ads will come to your aid!

Did you think that this game would not have in game quests? Well, you are wrong! there are plentyof quests for you to do which will come with rewards as well!

You can find the in game quests by tapping on the notepad in the upper left corner of the screen. There you can see the Season quests, normal Quests and Achievements. Try to complete the Quests whenever you can because they will give you plenty of EXP and other rewards, depending on the task given.

Now for the Achievements, you should make sure that you quickly read what they give because if you want more Gold then you should maybe try to complete some of them. The Achievements are a one-time-only completion, so that’s why the rewards are better!

In the game there will be some time limited events which can give you unique rewards. Try to check them out and if you have the chance, take part in any events there are! You can find various events such as PvP, 2v2, 3v3 and many more.

So just try to get into these events and make sure that you watch an ad to double the rewards which you obtain if you want to quickly save up on rewards!

Make sure you use your robot’s special moves

During battles you will always have an advantage if you attack your opponent with your most powerful moves. That is, if you use them at the right time! So make sure that you always do your best and outsmart the opponents!

These would be all of our World Robot Boxing 2 tips and tricks that we have for you right now! Do you know some more useful game tips and strategies to win more battles? Feel free to share them with us down in the comments section below!