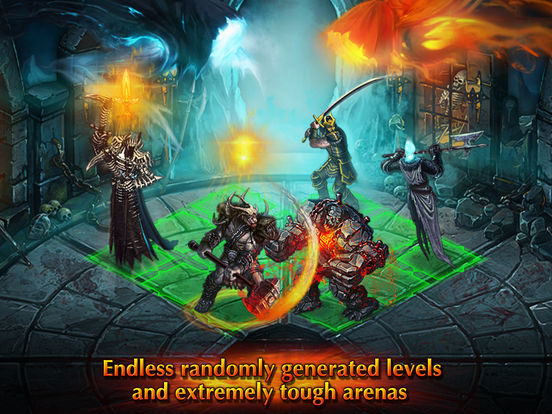 It’s better to focus on a single target rather than spreading your damage evenly across all enemies. A lot of the enemies you’ll face early on are melee attackers and they like to mob one of your party members. In order to minimize damage on your party, you’ll need to take out enemies one by one as fast as you can. Stick to a target and don’t let up until they’re destroyed!

Many of the dungeon layouts feature wide, open spaces. Since the enemies come in droves, you’ll need to be careful of your positioning. Charging into a big group of skeletons is a quick way to get yourself surrounded! Obviously, you won’t be able to duck out of an enemy’s reach if you’re surrounded, so don’t let this happen! Try to let enemies be the first to engage. Each type of enemy has a set amount of spaces they can move, so study them closely. Once you’ve got it down, try to position your heroes just out of reach to them. Then, you’ll force them to walk right up to ready to get hit!

Let’s take a look at the Reaper of Souls, for example. The Reaper is the first hero you unlock, not counting the Blade Dancer, your starting hero. The Reaper starts out with a passive skill that grants an attack bonus depending on the Initiative stat. Reaper gets +5% more attack per initiative point, so you’ll want to build initiative. Reaper’s active skill is Teleport and it does exactly what it sounds like. Taking advantage of these skills lets you play Reaper like a vanishing assassin, striking hard followed by a swift retreat.

Be sure to check abilities whenever you get a new hero. Their skill trees allow them to be built a certain way, but for the most part they have an optimal method of dealing with enemies.

4. Don’t open the chests early on!

When you finish one of the earlier dungeons, don’t bother opening the chests. Save your keys and lockpicks! The early chests often have junk gear in them, and by that we mean gear with negative stats on them. Save your chest openers until you’re further in the game, as it’s not really worth it to open the chests early on.

The first thing you should do when launching the game is to complete the dailies. These quests will require you to slay a certain amount of monsters, win in the arena, or fight a boss. Completing these quests individually will give you stuff like skeleton coins and gold, but completing them all before the day is over will net you some special goodies!

That’s all for World of Dungeons. If you have any other tips or tricks to share, let us know in the comments below!