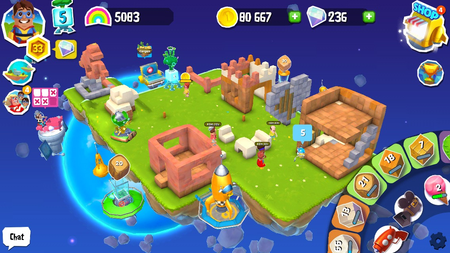 A new world building game is now available for download on the App Store, an ambitious game that’s been in development for over three years.

We’re talking about Supernauts, developed by Grand Cru, a game clearly influenced by Minecraft that also offers some interesting mechanics that set it apart from the highly successful game developed by Mojang.

In Supernauts, the planet is now almost completely submerged. As a Supernaut, you will hve to rescue people and bring them to a orbiting speca colony. These are actually the two different gameplay styles included in the game. In the first, you will be solving some simple puzzles while in the other you will be building and improving your colony.

Supernauts also comes with some multiplayer features that will allow you to explore other planets, join a clan with other players and enter some nice competitions.

Developer Grand Cru believes quite a bit in Supernauts, as they have invested time and money into its development. The team will continue working on the game for years, apparently, so that it will change, offer new features and feel like a better game than it did at launch.

Supernauts is now available for download on the App Store. Make sure to check it out if you’re a fan of Minecraft and quirky games in general.