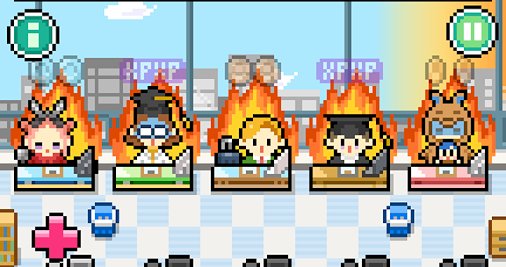 WorkeMon is a great new game for Android, one that borrows some mechanics from Pokemon and blends them in with the time management genre in an unique mix. Entertaining and absolutely charming, WorkeMon is that type of game that keeps you glued to your phone’s display for hours trying to catch all the Workers and take your company to new heights. We’re here to help you achieve that faster than the rest by sharing with you some WorkeMon cheats and tips in our complete strategy guide.

It’s going to take patience and some solid planning, but it will be fun. So let’s check out below Touch Tap Play’s WorkeMon tips and cheats!

1. Workers Guide
There are two types of workers in the game: those that produce coins and those that produce XP points. The former are clearly the ones that bring more value since it’s money that you need to progress through the game, unlock new areas and goodies so I would suggest you to focus on those first. But in the end they are all useful and any Worker is better than an empty desk! Below I have a set of tips and tricks related to the Workers, training them and catching them in order to get the most from them:

– Nitpicking: This is extremely useful as it increases the amount they produce, whether it’s XP or Money. You should Nitpick as often as possible especially early on since that will be your main way of making enough money to pay your Workemons and make a profit.

– Focus on Yelling when trying to catch: Don’t be too picky in terms of Workers you get at first (we’ll talk about this below): it’s important to have your desks occupied, no matter how much money they want – and ideally with Workers that produce coins. Only after you have a steady flow of income, some money set aside and some experience you can start caring about the details. Until then, focus on yelling to make sure that they accept your contract!

– Get any Workemon, don’t pay the salaries for those that don’t matter: I’ve already told you that you should hire any Worker you meet – keep them until the end of the month and simply don’t pay their salaries if you don’t really need them next month (or if you don’t have the money). There’s a big chance they will leave the company, but you can hire new ones by going hunting again. You make a profit this way, getting free work, basically!

– Hire new workemons when the new month begins: If you really want to get the most out of them, you should focus on getting your Workers as soon as the month starts, ideally during the first week. I never try to hire a new Worker after the first week because I will not be able to pay their salaries or if I will, I will be losing money. It might work early on: hire them and don’t pay them, but I believe that using that energy for Nitpicking is the better idea. So only hire new Workers during the first week for maximizing your profits!

– Train your Workemons: whenever their Eagerness meter is filled, try training them. Focus on one or two not to lose them when they want raises or if you don’t have enough money. When training a Worker, tap the screen quickly as this increases the chances of the training to succeed.

– Buy new desks: After the first 3-4 months, you should have 6 desks bought and then buy a new one every month or every couple of months. You might struggle to keep them all filled with Workers, but take things slow and set the base for your company. Soon, you will be able to have a lot of workers AND pay their salaries at the end of the month!

2. Watch ads constantly
You can watch an ad every 5 minutes to get some extra money. The good thing is that the more ads you watch, the more money you get. Eventually, after upgrading your Mom’s card twice, you will start receiving rubies for watching ads, which can be exchanged for a ton of coins (for every 3-4 ads you watch, you’ll be able to get the 10k coins package). So watch ads often!

3. How to invest your XP Points
In my opinion, for the first 10-15 levels that you gain, you should focus on one thing only when it comes to spending your XP points: overtime or weekend work. Invest all the points in one area in order to greatly increase the chances of your workers to work either during the weekend or during the night. Only afterwards you can start working on other areas.

4. Keep unlocking new Areas
New areas will not only give you brand new places for hunting Workers, but they will also unlock new and interesting shops in the game. Most of the shops will still be off-limits as you start playing, but you should work your way through the areas slowly and know what the shops have to offer in order to better prepare and plan your purchases in the future.

5. Buy luxuries (with care)
Luxuries are extremely expensive early on, but eventually you will start affording them. Buy a few of the cheaper ones (4K cost) in order to increase your chances of getting some extra work done, but don’t waste too much time on those because it will take a lot of time for you to turn a profit on them unless you have a full company. But them with care, though: some items can only be equipped by male / female avatars, so if you pick a female luxury item as a male, you won’t be able to use it!

6. Be very patient and prepare for a slow start
The game is extremely slow and will tax you on all your errors. I didn’t really know much when I first started playing and after the first month, all my Workers but one resigned because I didn’t have money to pay their salaries. Fortunately, I had already opened 5 desk spots, so it was easy to fill them back in and start focusing on making the company work.

You will only be able to purchase one or, at most two things in the game per month and anything more will actually make you lose more than you gain. I believe that for the more expensive things (like the air conditioning), you will have to work and save money for a few months. So things are indeed slow, but there’s no hurry to get anywhere fast: as long as you focus on making a profit each month, you nitpick often, you keep increasing your Health and Energy and are progressing, that’s all that matters. Eventually, a moment will come when you will be able to progress a little faster, but the whole ride is extremely enjoyable in this game!

If you have other tips and tricks for fellow Workemon players, let us all know by sharing your comment below.