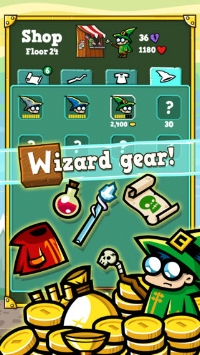 A really unique game, developed by 10tons, is now available on the Australian App Store in soft-launch mode, a new game that combines word and role playing games in a clever way.

Spellspire starts an unnamed wizard who must battle a variety of enemies like knights as well as some otherwordly beings like skeletons, goblins and more.

The way these enemies are fought is what sets Spellspire apart from the competion. During each battle, players will have to spell out words by choosing letters from a grid. The longer the word is, the more powerful the spell will be.

Once enemies have been defeated, you will receive gold, which can be used to purchase new gear for your wizard. Gold can also be used to purchase spells that can only be used once during battle to give the wizard a sound advantage during the thoughest matches.

While Spellspire may seem a very basic word game, the role playing game features add a bit of depth into the gameplay experience. It’s not really revolutionary, to be honest, but the mix seems to work nicely for a game that most will play on the go for a few minutes.

Spellspire is now available on the Australian App Store. A release date for the game in the other regions has yet to be confirmed.