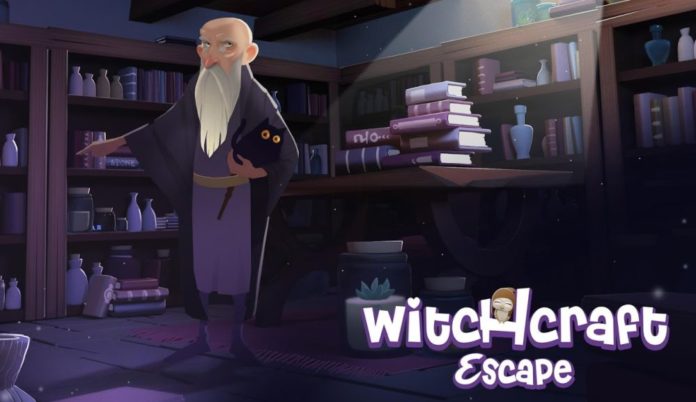 Witchcraft Escape aka Witchcraft Adventure is a really high quality escape the room type of game for mobile – but one that’s insanely challenging as well. But we’re here to help you beat the game by sharing a complete Witchcraft Escape walkthrough with you.

It’s going to be very difficult to help the young apprentice get out of the wizard’s room, but it will be a fun adventure too. So embark on the quest of escaping with us and let’s get this done!

Here’s the Witchcraft Escape walkthrough – or Witchcraft Adventure if you prefer so. (most likely, part 1 of it since the game is so long):

1. Tap the table, then tap the bread. Tap the arrow to go back.

2. Tap the left window and drag the bread over the plate. This basically ends the short tutorial and you’re all by yourself.

3. Tap the cupboard on the left side of the screen and notice the code on the piece of paper:

4. Go back and tap the table. First pick up a piece of the key under the table (you can barely see it). Then tap the book and tap the gray dots on it to resemble the model you’ve seen in on the cupboard.

There are some spells there that we must find the items for. Drag the key piece over its shape under the Repair Spell.

5. Tap the window to the right and pick up the key piece near the books. Tap the books, then tap the piece of paper under them to reveal the code:

6. Go back and tap the books on the table. Drag the piece you have picked under the Repair Spell and you will be rewarded with a key.

7. Go back and tap the door. Grab the key over the lock and get out.

8. Tap the first door to the right to zoom in. Tap the lock and use the code we’ve seen earlier: 3263. Pick up the crowbar and enter the room.

9. Tap the fireplace to zoom in. Pick up an extra hint between the table and armchair (that yellow, glowing thing). Then tap the book on the table.

That is a matching game. Simply tap the cards and pair them up until you are left with just one card. It will give you a blue gem of sorts.

10. Go back and tap the right side of the bookshelves to the middle. Tap the green cupboard and solve the puzzle there. The goal is to rotate those dials until you get a straight line from left to right.

IMPORTANT: When you get that line correctly, nothing will happen. You will have to go back and you will see the cupboard door open. It took me ages trying to get it right, before rage quitting and going back only to see that the door opens AFTERWARDS. Pick up the vase.

11. Go back and tap the bookshelves to the left. This time it’s a trickier puzzle in which you have to pull out each stick in the correct order. You pull sticks out by simply tapping them first, then dragging them to the right.

Here is the correct order (I am counting based on the initial positions, so third stick is actually the second one after you pull the first, top one): Top stick, Third stick, Bottom stick, Second Stick, Fourth stick and fifth.

Again, after doing this, you have to go back and see the cupboard has opened. Grab that piece of paper inside.

12. Go back and tap the left side of the third set of bookshelves. Pick up the books on the floor.

13. Go back and tap the right side of the third set of bookshelves. There is a planet puzzle there that we’ll have to get back to later on.

14. Go back three times to the main room and tap the books on the table. Tap the spell book and use the blue gem and bottle to create the Water Spell.

15. Go back to the fireplace and use the bottle of water on the fire. Drag the crowbar over the wood and pick up the piece of paper. (Also rate this amazing game 5 stars since you’re there!)

16. Go back and tap the books near the armchair. Drag the piece of paper from the fire and arrange it so that the red sigil is on the bottom left side of the paper:

Once you do this, you have three remaining cities: Rome, Beijing and La Mecca.

17. Go back three time on the hallway and tap the paintings to the left. You will be shown a “find the differences” minigame that you have to solve (the final one is the lady’s hair):

We see a pair of glasses, but a lens is missing. We’ll have to find that out first!

18. Back to the planet in the room to the left. This was actually a puzzle that I simply wasn’t able to solve, no matter what I tried. So I simply used one of the hints to open the planet (still curious though how it’s done, so if you managed to do it, let me know!):

19. Let’s go back to the hallway. First, tap the windows at the back and pick up a new free hint on the floor (that golden-nugget thing).

Then, place the books under the windows there. Tap the lower left side where the light is coming from to get a lens.

20. Go back to the paintings on the hallway (where the spot the difference minigame was) and drag the piece of glass over the eye glasses. Then pick them up.

21. Go back to the first door you have unlocked and do a bit of grinding. You have to constantly tap the middle bookshelf to the left, then go back, then go in again and so on until you will eventually spot this little ghost fellow:

When it finally appears (it took me 32 tries, so don’t give up!), drag the glasses over to it and then tap it to receive a piece of paper.

22. Now go back and tap the third door to the right. Use the code from the planet and enter. Then pick up the plastering spatula in the bottom right. There’s also a golden nugget on the shelves in the middle – pick it up as well (not a free hint this time). Pick up the spider’s web in the top left corner.

23. Go back to the third room on the hallway (the second you have opened) and tap the three colored bottles on a shelf to the left. Drag the colored piece of paper over to the hook on the left and you will see that you need 2ml of something.

24. Go back and tap the right side of the room, where you can see a blue bottle. There, we need to be left with 2ml of that liquid doing the little puzzle.

First, put 3ml in the right glass, then transfer them into the middle one. Then fill in the 3ml glass once more. Tap the glass to the right and then the middle one, and you will be left with 2ml. Tap to pick them up.

25. Go back to the colored bottles and add the blue one to the left. Now it’s time to craft the agate using the instructions to the left.

First, move the hose to the blue bottle and tap it to drip liquid in the plate. Move it to the purple one and do the same, then the white one, then the red, purple, red, red and white again.

26. Let’s go back all the way to the main room now. Tap the spell book and use the spider’s web and golden nugget to create the Light Spell.

27. Let’s go back to the pharmacy room. Tap the cupboard with many shelves – the one to the front. The minigame challenges us to place stickers on those shelves so that we meet the number requirements shown tot he top and the right.

This is insanely time consuming, but a fun puzzle. You can check out the solution below, with the mention that you’re missing the sticker on the left column, 4th row.

28. Tap the hole that opens up and drag the light spell over it. Tap to get inside. Tap the wooden thing to the left and drag the piece of paper on it. It reads: “If your friend you want to save / go and bring inside this cave”.

You can also tap the bubbles and place the agate you have created in the pharmacy into one of them.

And this is it. This is where I got stuck right now, with no ideas what to do next. I will keep playing though and report back with my findings.

If you manage to find the solution to the next steps, please share them with us in the comment section below.