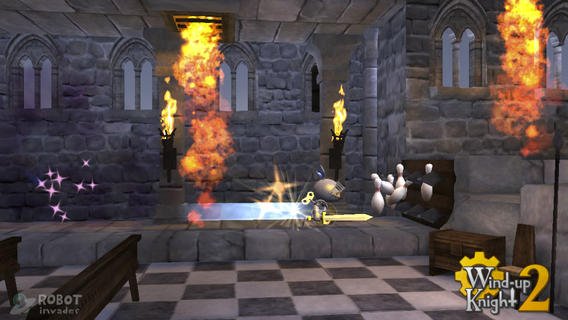 Want to move up the Tournament leaderboards in Wind-up Knight 2? What you need is a trainer that can take you from zero to hero faster than you can say Rocky Balboa. This guide is that trainer – your personal Apollo Creed – and if you stick to these tips and you’ll soon develop the habits you need to unlock more levels and score big in Tournament mode. So read on for out Wind-up Knight 2 cheats and tips!

1. Adjust date and time settings (cheat)
Tickets are what let you do the daily challenge levels in Tournament Mode, and you get one free ticket a day. If you go to your phone’s settings, select general, then date and time, and adjust your time ahead by a day, you can get a free ticket out of it. As an added bonus, if you’ve already played the Tournament mode, this will let you play the level again for just one ticket rather than the higher cost of a replay. Make sure you try this out soon before it’s fixed!

2. Levels first, Tournament second
This isn’t easy to do. If you’ve parted with cash to unlock the rest of the game, you’re going to want to experience the competitive side of Wind-up Knight. But here’s the thing: unless you’ve played through a lot of the levels there’s going to be a lot of stuff that takes you by surprise in Tournament Mode, and that means you’re going to waste a lot of tickets. Also, the more levels you play, the more gold you’ll rack up, and that means better equipment that will help you progress faster.

3. Buy equipment wisely
You want to get a few upgrades as soon as possible, but it takes time to earn gold. That means focusing on getting a better helmet, armor, and shield to harden yourself against all the bad things that are out to get your mechanical avatar.

There are two routes you can take. The first option is to take a note of the stuff that’s killing you, and purchase inexpensive items that defend against those threats. The Hard Helm is a good first purchase, since it’s just 5,500 gold and protects you against falling objects and catapults once per life. The Angel Helm is possibly even better, since it’s only 800 gold and completely replenishes your Winding power once per life.

The second, and perhaps better long-term plan, is to save up for really good items that work well together. The Spiked Helm and Red Caterpillar Armor are both 13,000 gold, and together will allow you to roll through enemies, flame jets, catapults, and falling objects unscathed. That’s just 26,000 gold to render most obstacles harmless. Add in one of the upper-level swords and you’ll be pretty near unstoppable.

Finally, you might want to look at a shield. This is largely down to personal preference, but a good bet is to start with the Magnet Shield, since holding it up draws gold coins to you and makes it a lot easier to get those tricky S-Ranks, which in turn means more gold. When you’re ready for Tournament mode you can purchase a Gem Shield, which will help a lot as you race for the top score.

4. Keep your eyes ahead of you
Don’t focus on what’s right in front of your character. You’ll have better reaction time if you look about halfway between Sir Knight and the edge of the screen. It’ll feel like everything slowed down. It didn’t. You sped up.

5. Do all the side quests
Aside from the fact that you can’t progress in the game without a doing a few of these, side quests give a good bit of gold and will help build your personal skills up. Games like this are often about muscle memory and pattern recognition, and once you’ve completed the side quests for a level, moving on to the next challenge is a lot less… challenging. Doing the side quests before moving on to the next level also means you’ll remember the map better, which means fewer odd mistakes made simply because you confused this level with the one you were just playing. Side quests can also force you to try different ways through a level, which will help you find the oh-so-elusive gnome hat.

6. Get those S-Ranks
The best way to get more gold is to earn an S-Rank. The trouble is finding that Gnome Hat. It’s a real pain at first, but there are a few things to look for. First, there are times where you can jump over a mushroom springboard to get to a hidden area. Second, try rolling under platforms if they don’t have a spiked wall in front of them; the developers love tricking you into thinking a wall is solid, but unless it’s got spikes on the front, there’s often a small gap at the bottom. Third, look for walls you can use to change direction. Often the only thing that’s keeping you from getting to a gnome hat is the direction you’re traveling. It might take a well-timed double-jump, but if there’s a wall you don’t have to use to complete the level there’s usually a pointy red reason for it being there.

7. The restart level option is your friend
Sometimes the only way forward is to start at the beginning. If you’re doing a side-quest and miss a gem or a fairy, you should either die ASAP or restart the level. You don’t get credit for the quest if you don’t collect all the items, so there’s no point wasting game-time by completing a level without catching them all. The same goes for getting your S-Ranks. The devs love putting checkpoints right above the gnome hat so you can see it, but can’t get to it without restarting the level. Since getting your S-Rank also means collecting all the gold in a level, if you miss a coin you may as well die before you get stuck at a checkpoint.

8. You can turn off checkpoints
If you’re feeling confident enough to score the 50 gold bonus for completing a level without respawning at a checkpoint, or maybe you’re just tired of having to reload the level if you spawn in past a missed coin or Gnome Hat, you can simply turn them off. You can do this by accessing game settings on the main menu, then clicking the toggle in the lower-right. Bear in mind it’s just a 50 gold bonus, so you can actually earn more gold by just playing through a level again, but if you’re in it to win it, this can save some hassle.

9. Watch your Windup Power bar
One of the most frustrating ways to die is running out of juice. It’s not really that common, but remember there are a few things that recharge your batteries. Don’t miss a key if you can help it, since that gives you a full charge. Don’t just jump over enemies since killing them gives you a boost, and make sure you’re timing your attacks and blocks. It might not be intentional, but better timing seems to give more wind-up power. It doesn’t seem consistent, so it might be a bug, but every little bit of juice counts.

10. Dealing with framerate issues
If you’re playing on an older device like the iPhone 4, you might encounter a few glitches due to low framerate. Every now and then you’ll be in the middle of a jump and it’ll look like your character has lost all his momentum, or you’ll step on a springboard and be rocketed past all the coins and off the side of a cliff. It’s maddening, but there are a few ways to deal with it. First, you can restart your phone and put it in airplane mode so you don’t have anything running in the background or spamming you with notifications. Second, be aware that it’s going to happen at the least opportune time and avoid unnecessary double-jumps. You never know when you’re going to need that extra jump to deal with lag.