Home Guides Wildscapes Cheats: Tips & Guide to Pass All Levels and Expand Your... 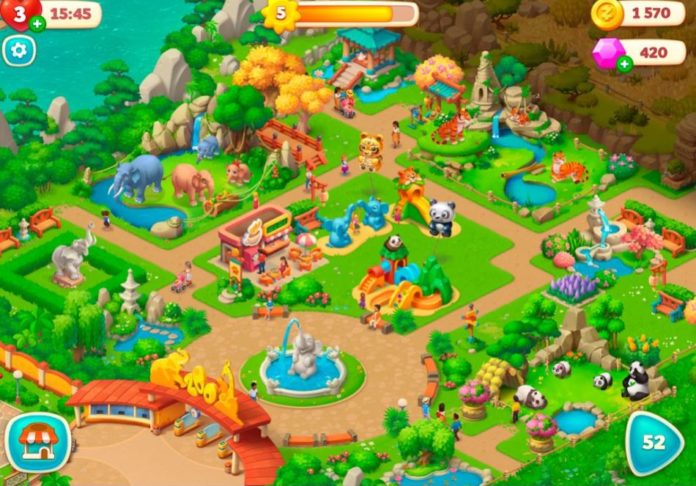 In today’s article we are going to cover all of the Wildscapes tips and cheats that we gathered this far to help you build and expand the most beautiful and exciting zoo!

Since you are able to add animals, attractions and various decorations, we will go over everything that you need to know for you to get the most beautiful and unique zoo! Now you know that the typical match three puzzle games can get a little tricky sometimes, but that’s exactly why you are here!

So if you are ready to learn everything that we have to share about Wildscapes and give you all of our Wildscapes tips and tricks, then let’s not waste another moment and dive right into them!

Know the most basic of things!

One good point where you can start in the game is by learning the basics. Since this is a match three kind of game, you can probably tell by the name that you need to match three or more matching blocks to get them out of your way!

Now the most important thing you need to pay attention to is your moves. Each level has its own requirements, and you can see them on the left side of the screen.

Try to always reach these goals as soon as possible within the level, and by trying to conserve your moves, because that way you will never worry about running out of them in the first place!

One other super basic thing that you can try to do is practice your combo making skills! I will talk about this more into detail below, but keep one thing in mind: combos are super important, whether you will use them immediately or save them for after the stage! Just try to remember that!

Play the levels in advance

Now this is something that might come as a personal choice, but I believe that it is way better to play the levels in advance. Now only will you get a hold of the stages much easier, but you will also be with the mind set on making the best matches and therefore you will succeed in matching more and better all throughout the game.

I suggest that you try to pass as many levels before you get to decorating as you can or want, because I am pretty sure you will match them easier once you have gone into that mindset.

For example, if you play 10 stages in a row and then you get to decorating, then try to play the stages again, you might not be as quick at thinking and making (the right) decisions as if you would be after playing 10 stages straight.

This is a little trick that I discovered by playing tons of match three games which have a reward such as decorating or so. It simply works better if you are set on playing the stages and then giving yourself the decorating as a reward for achieving a certain goal.

I know it sounds weird, but bear with me. It’s all a matter of concentration and quick thinking!

Let’s talk about the decorations!

Now this, in my opinion, is one of the best parts of the game! The decors are all animated and very well made, so it’s difficult not to fall in love with them and want to add as many as possible!

But decor costs money (Coins) and they are not all available from the very beginning, so we will have to make do with what we have for now!

If you want to unlock more decorations, all you have to do is play the stages. Each of the stages you can play will unlock a new piece of decoration or animal, which can vary from various greenery (trees, bushes and whatnot) to attractions (amusement stuff, playgrounds), relaxation facilities, benches and even paving to make your own roads.

In order to decorate all you have to do is tap on the “Shop” button in the bottom left side of the screen and there you will have four categories. All of the categories are locked at start, except for the first one which you start with. To place a decor, simply tap on it and then tap wherever you want it on the ground!

The decor can be placed anywhere you want, so you don’t really have to follow exactly what the game says and instead you can place it anywhere you want. Once you found the location for the specific piece, simply tap on the green tick to buy it and place it there.

You can move the decors and items that you placed any time that you want (including the roads / paving) by tapping and holding on them so that you can really create something unique in your very own little zoo!

I suggest that if you placed some decors in the default way (how and where the game suggested) you can then tap and hold on them to move them and create something nice! Add trees, bushes, flowers and benches and make a nook where you would like to hang out yourself!

This is a feature which will let you unlock new stuff, new decors and animals and let you earn extra Coins whenever you finish any match three game. The Zoo rating can be increased by adding more animals and decorations, and if you want to know how much you get from each decor, you can check them in the Shop.

Each decor will have a sun icon underneath it (above the price listed) which shows you how much it increases your zoo’s rating!

The bonuses you can get from the higher rating zoos give you more and more Coins, so that is good for buying even more decorations!

In order to unlock new decoration styles you will need to reach zoo rating 8, then zoo rating 18 and eventually zoo rating 28.

It is not easy, as it will require you to play a lot of levels, make a lot of Coins and buy tons of decorations!

Every now and then you will see that some visitors have certain requests for you! I suggest that you try and complete as many as you can, because these requests will give you Diamonds which you can use to purchase various boosters in the game and, if needed, expand your moves at the end of a stage!

Every single day that you will log in to the game you will receive a daily reward which will come in handy, especially during the later levels!

This daily reward will give you various goods, including boosters which (as you might well know) are super useful!

I suggest that you log in every day to the game and collect this daily reward, because you will not regret it! Even if you don’t really plan on playing the game that particular day, I still suggest that you should log in and simply claim it, so that you can use the free boost the next time that you will log in and play!

Make tons of matches and get Coins

Now there are a ton of possible matches in the game, and they will come in various forms and places, so I can’t tell you match block X with block Y and you’re good, but instead I will tell you how to match the tiles so that you can make a ton of bonuses!

– By matching four tiles in a line (vertically or horizontally) you can get a Can of Soda, which, when matched, will clear all the tiles in a row or column.

– By matching 5 or 6 tiles in an L-shaped or T-shaped formation you will get a Bag of Chips, which, when matched, will explode and remove a few blocks!

– By matching 4 pieces in a square shaped formation you will get a Spinning Top, which, when matched, will fly away towards one of the blocks which you need towards completing your level.

– By matching 5 pieces in a line you will get a Bucket of Candy, which, when matched with any piece on the board, will remove all pieces of the same type from the field.

I suggest that you try and match these blocks among themselves to make some super boosters!

For example, if you match a Bag of chips with a Can of Soda, you will remove 3 vertical or horizontal lines exploding! It’s super good, so whenever you have two of these special tiles next to each other, make sure you match them!

It works especially good with two Buckets of Candy, since that is basically the ultimate wombo combo! It will remove all the tiles from the field! It’s also the hardest one to pull off, so good luck!

Another thing you should keep in mind here: you don’t always have to use the power ups! If you simply make the power ups and then leave them on the field without activating them, when the level will end, it will automatically activate all the power ups that you have on the board and give you extra Coins for all the points you make!

This should be good because it will give you points at the end (when it will activate the power ups) without you having to use up your moves to activate them and possibly miss achieving the stage’s objectives!

Always try to 3* a stage

By 3 starring a stage you are basically gaining extra Coins and adding more stars to the Star Chest! This Star Chest is a useful in game event which is very good because whenever you gather enough Stars you can open the chest and claim the free loot inside (usually boosters)!

Another good reason to 3* a stage is so that you can claim more Coins by completing it!

Do not give up!

Even if a stage seems impossible, you should never give up. At later levels, it might take over 10 tries for some levels, without using the boosters – heck, sometimes even while using them!

I know this because I’ve played the game quite a bit, so don’t get overworked by that! Simply keep a cool head and try to play again and again whenever you have lives! Stages tend to get sometimes super difficult, then, at your 15th try, they will be so easy that they will basically complete themselves on their own!

All I am saying is, persevere and do not give up! The stages are random, so whenever you try something new, you have a new chance of success!

Use the boosters if necessary, but use them smart!

When you reach levels 14, 18 and 20 you will unlock three new boosters! The first one will start your level with an instant Bucket of Candy, the second one with a Bag of Chips and Can of Soda, and the third one with a couple of Spinning Tops.

If you are really having a tough time beating a level, use these to give you a head start! However, I suggest that you first give the stage a few tries, because it’s always better to save the Boosters for the really end-game stages!

These would be all of our Wildscapes tips and tricks that we have for you right now! Do you know some other cool tips that you want to share with us? Leave them down in the comments section below!