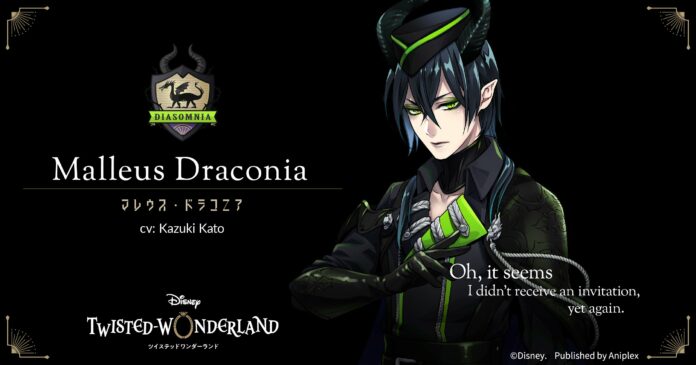 Disney Twisted – Wonderland is an exciting RPG for mobile devices. Players will find themselves in a magical college where they can meet various characters. All characters are divided into Dorms which refer to various villains from the Disney universes, and in this guide, we will tell you about Malleus Draconia.

Who is Malleus Draconia?

Malleus Draconia is one of the most mysterious characters in the game. He is the house warden of Diasomnia. As befits his status, the form of Malleus Draconia stands out a bit. He has a longer coat with bright green details.

Malleus also stands out for his appearance. He is tall and his skin is very pale. He also has pointed, elf-like ears and black curved horns. Malleus is one of the strongest mages in the game, but he has communication issues—during conversations, he always maintains a cold tone. Most students avoid Malleus because of his aura. Nevertheless, Sebek, Silver, and Lilia communicate closely with him and do not allow him to isolate himself from society.

RELATED: Who is Leona in Disney Twisted-Wonderland

Although Malleus’ knowledge of magic is almost limitless, he also has a childish side. Because he grew up in isolation, he does not know much about the world and progress. Therefore, he greatly admires people who understand technology. Also, despite his coldness in communication, it’s safe to say that Malleus is caring. Proof of this is his love for the Tamagotchi. He took care of it for many years, and when it stopped working, he immediately went to ask others for help to save his friend.

Who is Malleus Draconia in Disney Twisted – Wonderland