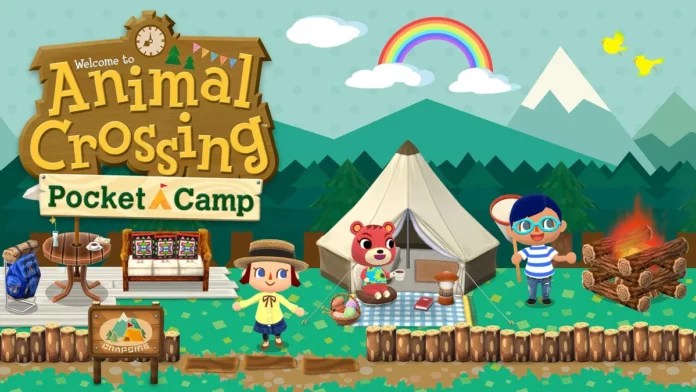 Animal Crossing: Pocket Camp is a 2017 free-to-play social simulation mobile game in Nintendo’s Animal Crossing series for iOS and Android devices. It was released in Australia in October 2017 and worldwide the following month. The game continues the series of social simulations that allow players to interact with a small campsite with various campers, performing small tasks, engaging in commerce, and decorating living spaces.

Animal Crossing is a series of social simulation video games in which players customize their avatars’ living spaces and communities by trading materials and favors for decorative items.

In Pocket Camp, the player decorates a campsite in lieu of a town and gathers materials such as wood and cotton from the surrounding area to trade for furniture orders. The player-character befriends neighboring animal characters, who can visit the player’s campsite, as can other human players both invited and at random.

The player can travel to multiple locations, such as Sunburst Island or Saltwater Shores, and a marketplace that sells furniture and avatar clothing. The player’s customization options extend to their avatar’s gender, facial traits, and recreational vehicle abode. As such, a lot of NPCs exist in the game to fulfill the player’s requirements. One of those characters is Diva.

Diva is a sisterly frog villager in the Animal Crossing series. Her Japanese name, Aida, is a reference to the titular character of the Broadway musical Aida, which takes place in ancient Egypt.

Her English name is more straightforward, simply calling her a diva, while her Italian name is “Viola” and french name is “Violette” which means “purple,” a reference to the color of her skin. Her Spanish name “Morania” is a pun between the words “Morada” and “Rana,” meaning “Purple” and “Frog.”

Diva is a sisterly villager. When befriended, she will give the player fighting tips and teach them ways to relax. Diva will also give the player medicine if they are stung by a wasp.

Diva was added to Pocket Camp in the October 16, 2018 update. Her preferred theme is elegant, and she primarily gives wood as a reward to players.

Who is Diva in Animal Crossing: Pocket Camp