Home Game Guides Where to Place Dummy Shells in Fortnite 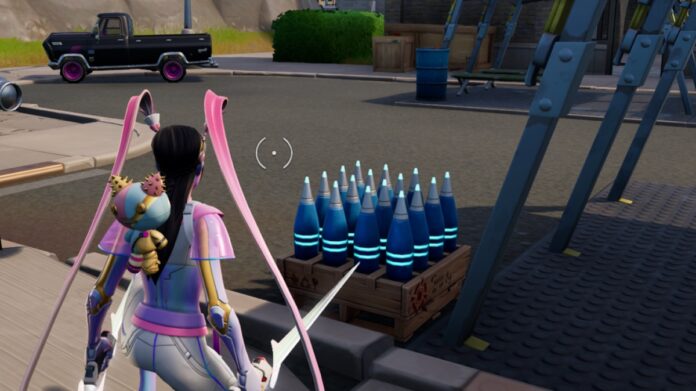 Another week of Resistance Quests has arrived in Fortnite! This week, loopers are asked to perform yet more spy-craft by hacking loudspeakers and servers, replacing ammo with dummy shells, and stealing files. As always, we start by establishing device uplinks before moving onto the proper task. The second main task to complete is ‘Swamp IO Munitions with Dummy Shells.’ Find out more below.

Where to Place Dummy Shells in Fortnite

Only two sets of dummy shells have to be placed, so the best place to land to complete this task is in Tilted Towers. It is a busy area, especially while the battle is taking place there, but there are two locations in that area quite close together. This means that with a bit of luck, you should be able to replace both sets of munitions in one match.

You will find the munitions at two ends of Tilted Towers: east and north east. If you do end up getting killed before reaching the second box of ammo, do not worry; the first part you completed still counts, and you can just land and complete the second part to finish this section. The boxes have a sparkling white glow about them:

Approach the box and interact with it to replace the ammo with dummy shells like this:

The next part of these week 7 Resistance Quests requires players to establish a device uplink near Camp Cuddle or Shifty Shafts! Good luck.

Where to Place Dummy Shells in Fortnite