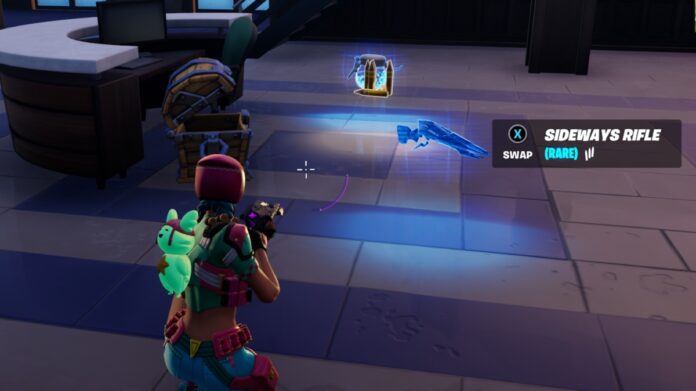 Fortnite Chapter 3 Season 2 has brought yet more challenges for players to complete for bonus XP! The Sideways Showdown Week challenges were added with the latest update (v20.40), to get players involved with these powerful weapons and win some much-needed XP. The Sideways weapons are available to find and use until May 24, 2022, but where can they be picked up? Find out below!

The two Sideways weapons added this week are the Sideways Minigun and the Sideways Rifle. These strange weapons were first introduced along with the Cube Monsters in the Sideways Anomalies, in Chapter 2 Season 8. Now they have returned for one week only!

Both weapons are found as floor loot, in regular and rare chests. Only Epic and Legendary Sideways weapons are found in Supply Drops. Players cannot, however, find them in fishing spots. IO chests may drop Rare, Epic, and Legendary Sideways weapons. Locations with many buildings and chests are the best spots to loot for this weapon as it increases the chances of finding either type. Players have been spotted using a tank or Armored Battle Bus to destroy whole buildings in The Daily Bugle in order to find one of each type as the loot falls to the ground!

The Sideways Rifle is a medium to long range weapon that can do between 40-57 damage, depending on the rarity. It is fast-firing and fully automatic and players can fire 10 medium bullets before it overheats. The Sideways Minigun is a short to medium range weapon that does between 18-24 damage depending on rarity. Just like the rifle, this weapon is fast-firing and fully automatic, firing 54 light ammo bullets before overheating.

Hopefully that has helped you find one of these exclusive weapons quickly and easily! Let us know in the comments below if you would like the Sideways weapons to stay. Good luck and happy battles!