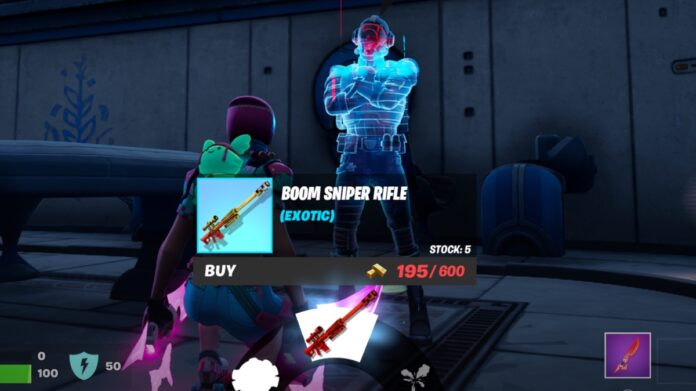 Fortnite’s new chapter 3 season includes a range of amazing weapons to find or purchase around the map. These weapons are available from vending machines, from chests and supply drops, and from NPCs wandering in certain areas. Any weapon purchased from an NPC costs Gold, which can be gained by opening chests, destroying beds or sofas, and by killing opponents. The weapons come in different rarities including common, uncommon, rare, epic, legendary, and exotic. Using these weapons on opponents can sometimes count towards quests or missions! Check out below how many exotic weapons we found on our travels.

The exotic weapons can be purchased from NPCs in exchange for Gold. These NPCs can sometimes not spawn in every match, but if you restart, they usually appear. We found 9 exotic weapons available to purchase all around the map from various characters:

Peely is situated in his room on the fourth floor in a northeast building at The Daily Bugle. He has the Boom Sniper Rifle to purchase for 600 Gold.

The Foundation can be found in The Sanctuary and has the Storm Scout sniper rifle for sale for 500 Gold.

The Origin is situated northwest of The Sanctuary and is selling the Night Hawk for 400 Gold.

The Boom Sniper Rifle is sold by The Visitor, who can be found on the largest island on the east side of the map. It costs 600 Gold.

Cuddle Team Leader can be found at Camp Cuddle in the main building with a pink roof. They are selling the Marksman Six Shooter for 400 Gold.

Quackling can be found in one of the log cabins at Camp Cuddle selling the Marksman Six Shooter for 400 gold.

Another Storm Scout can be purchased from The Scientist for 500 Gold at Synapse Station.

The Imagined is usually found walking around the Seven Outpost south of Condo Canyon. She sells the Storm Scout for 500 Gold.

Ludwig is in a building at The Joneses and is selling The Dub for 600 Gold.

Let us know in the comments below if you have discovered an alternative exotic weapon not shown on our list!

Where to Find Exotic Weapons in Fortnite Chapter 3 Season 2