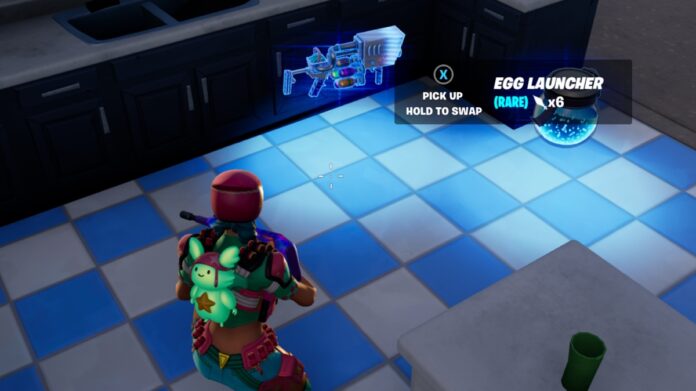 The Egg Launcher in Fortnite was added during Chapter 3 all the way back in March 2018. The seasonal addition replaces the grenade launcher temporarily during Easter events, and is basically expected by fans every year since its first introduction. It was unvaulted during Chapter 3 Season 2 in all its usual rarities- Uncommon, Rare, Epic, and Legendary- and deals more damage to structures than to opponents. Combined with the other new addition to this season- the Bouncy Eggs– it can be a super fun weapon to use!

Where to Find the Egg Launcher and How to Use it

The Egg Launcher can usually be found in chests:

Epic and Legendary Egg Launchers can also be found in Rare Chests. Uncommon and Rare Egg Launchers can be picked up where players would normally find floor loot, such as on a roof or in a building. They are not found in fishing spots or in Supply Drops.

The Egg Launchers uses Rocket Ammo and can hold 6 Rockets in its magazine. They deal between 67 to 77 worth of damage to players, and 190 to 220 damage to structures. They can be pretty bouncy so be prepared to calculate where to launch them after using the first egg as a test!

They are best used to knock down opponents’ structures in build modes like this:

Load in and grab an Egg Launcher now before the Spring and Easter event is over! Good luck.