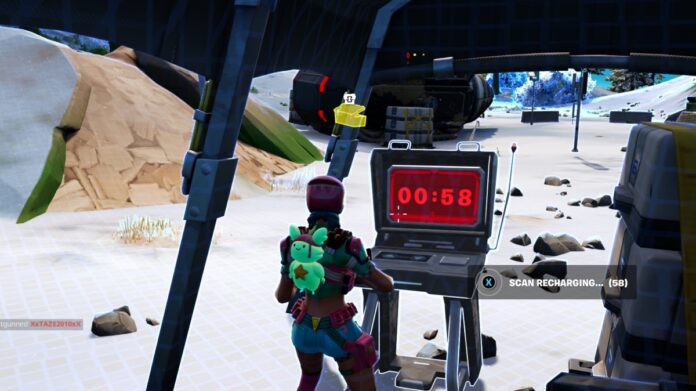 Fortnite Chapter 3 has ongoing seasonal quests to complete, with more being added regularly. This week, players are asked to interact with a Drill Scanner, a computer that is positioned near a huge drill. The scanner can be found under a white tent, and when interacted with, it scans a large area for items such as chests and ammo boxes, other players, and wildlife.

Where To Find the Drill Scanner

The Drill Scanner is inside a white tent beside an IO drill. There are two guards patrolling the area, and a couple of IO loot boxes. When you approach the area, the IO guards will attack, so be ready to take them both out. This means you may have to pick up a nearby weapon before approaching this small base.

At the moment, we found three Drill Scanners: at Logam Lumberyard, north of the Daily Bugle, and south of Coney Crossroads. However, there may be more in other IO locations shown in the map below.

Approach the scanner and interact with it. It scans a wide amount of the area around you and highlights anything that may be of interest to you.

This includes chests, ammo boxes, enemies, and wildlife. You have around 10-12 seconds to check out what is around you. The drill scanner then has a cooldown of 1 minute from when you activate it before it can scan again.

There may be more Drill Scanners appearing around the map, so keep a watch out for IO guards patrolling, huge drills showing up, and white tents being erected. These scans could come in handy wherever there are points of interest and larger locations.

Where to Find a Drill Scanner in Fortnite Chapter 3