Home Game Guides Where is the Hall of Ancient Heroes in Cookie Run Kingdom? –... 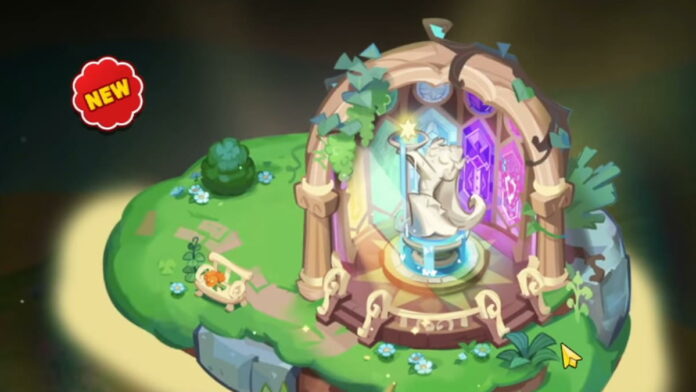 Cookie Run: Kingdom received a rather sizable update in May, and one of the things added is a new structure for your kingdom called the Hall of Ancient Heroes. It’s not available right away, so you’ll have to work towards it before you can build it. Today, we’re here to answer the question: where is the Hall of Ancient Heroes in Cookie Run: Kingdom?

Finding and Unlocking the Hall of Ancient Heroes in Cookie Run: Kingdom

The Hall of Ancient Heroes is located on the small peninsula near the center, southern edge of your kingdom. Initially, you’ll only see a small white statue, but after you’re done with the quest line, it’ll be fully restored.

To unlock the Hall of Ancient Heroes, you must have cleared episode 6-15 of World Exploration and have six Cookies at level 30 or higher. Once you fulfill these two requirements, you’ll automatically receive a new red quest icon on the right side of your screen.

Tap on the quest icon to initiate a new quest called “A Well-fed Gnome”. Maestro Sugar Gnome will request two Tart Jampies, which can be made at any Bakery that is at least level 2. One Tart Jampie requires 6 Jellybeans, and 3 Biscuit Flour. You can get Jellybeans from the Jellybean Farm, and Biscuit Flour from the Windmill.

After completing the quest, you’ll receive another one called “Building the Hall”. Maestro Sugar Gnome will point you to the statue we mentioned earlier, and he’ll ask you to restore it using an Aurora Compass. At this point in the game, you should have a few of these lying around, so it shouldn’t be a problem.

Related | How to Get Costumes in Cookie Run Kingdom

On the bottom, you’ll have slots to set Cookies as Disciples. You have 20 Disciple slots, but you must unlock each one using Radiant Shards. The purpose of this is that all Disciples will match the level of your Paragon Cookie, as long as they are slotted in.

You can remove Disciples at any point, but be warned, as there is a five-day cooldown before the slot becomes available again. You can use speed-up items to quicken the process. Take advantage of the Hall of Ancient Heroes to use Cookies at higher levels without actually leveling them up!

Where is the Hall of Ancient Heroes in Cookie Run Kingdom? – Answered